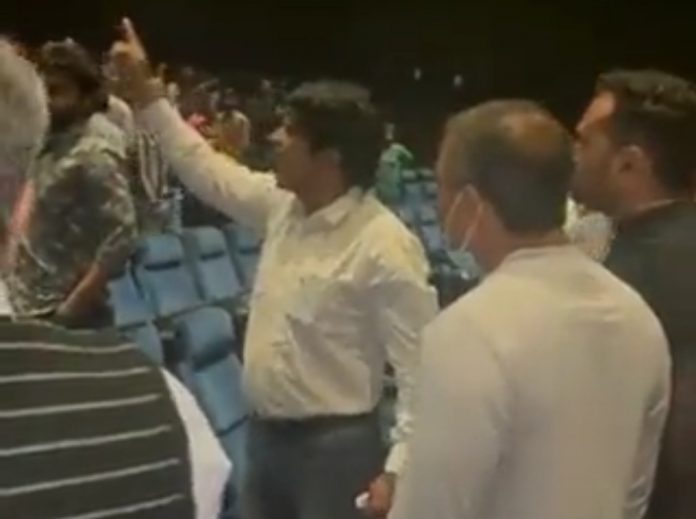 New Delhi: Controversial Bollywood movie Kashmir Files,  based on exodus of Pandits from Kashmir, has added a new fillip to the ongoing anti-Muslim hate campaign as scores of video clips have emerged where the film watchers were purportedly seen giving calls for killing Muslims and forcefully marry their women to “reduce rising their population”.

The film has not only given an opportunity to the right wing groups to keep ratcheting up their hate campaign in mainland but has also given a ground to the Narendra Modi government to “cover up” the wrongs done to the people in the Valley.”

A man was seen, after watching the film, asking Hindu youth to marry Muslim women to reduce their population. “If every man who is between 20 and 25 years of age starts marrying Muslim women, then their population will be halved in three generations,” the man says in a video clip, which has gone viral in the social media platforms.

This is call for extermination.

Theatres used to be a safe space for everyone: for couples, for minorities, for friends. Muslims have been robbed of one more comfortable public space today. Muslims going to theatres now stand the risk of mob violence. pic.twitter.com/Uwe8XHBRZa

In several videos, pro-genocide slogans were raised. Some of the slogans are as follows: Jab mulle Kate jayenge Ram, Ram chillayenge [When mulle (derogatory term used for Muslims) will be cut into pieces they will shout Ram, Ram (Hindu deity)] and Jai Shri Ram [Hail lord Ram].

The sloganeering and hate speeches have been reported not only from small towns and but major cities as well. Such developments have been witnessed in the national capital too. However, there is a complete silence from the police and the administration over such unlawful acts.

"Jab mulle ka@te jaayenge Ram Ram chillaayenge"– this slogan is raised by people in a theatre in Bijnor after watching Kashmir Files. They also raised the slogan "Bharatiya Janata Party Zindabad". Scary that there is no police action on these murderous slogans against Muslims. pic.twitter.com/t15JhToqZx

There is no doubt that the BJP IT cell and whole propaganda machinery of the party are using the movie to strengthen the image of Modi’s as a saviour of Hindus, as in most of the videos the slogans were raised in favour of BJP and Narendra Modi and that the West Bengal and Delhi chief ministers, Mamata Banerjee and Arvind Kejriwal, came under serious attacks.

A movie based on an extreme tragedy & exodus of Kashmiri Pandits is being weaponized to create hatred against the opposition & Muslim minorities. Instead of reconciliation & justice, this is the alarming sentiment that's being wildly reinforced across #india. #KashmirFiles pic.twitter.com/Uz7wKDtztZ

The film has got full patronage of BJP and its parent body Rashtriya Swayamsevak Sangh (RSS) as PM Modi and RSS chief Mohan Bhagwat are openly promoting the film.

Apart from this, half-day leave for government staff have also been allowed to watch the film in Assam by the BJP-led government.

Several Kashmiri Hindus who are victims of the 1990 violence have outrightly rejected. The Kashmir Files, they believe, has been made with a sinister agenda. They denounced vilification of the Muslim community through the film and slammed the BJP and RSS for using them to enhance their nefarious design.

Kashmiri Pandits (Hindus) slam the producers of #KashmirFiles, calling it BJP and Hindu nationalist propaganda meant to exploit old wounds, instead of healing them. pic.twitter.com/N237uw4y8z

Modi during whose tenure as Gujarat CM hundreds of Muslims were massacred in 2002 and thousands of others displaced. Several women were raped and killed. Several victims were burnt alive.

Some films and documentaries were made on these incidents. But, Modi ensured that those films are not shown in Gujarat.

Parzania, a Bollywood film released in 2007, in Gujarat by Modi. A documentary titled as Final Solution was banned in 2004 by the then BJP-led central government.

In a nutshell, The Kashmir Files appears to be made with a sinister agenda with the full support of the Modi-led government. It has provoked anti-Muslim sentiments and is likely to incite violence against the community. This film has once again unveiled the anti-Muslim face of the government and it is no surprise that the country opposed a resolution proposed to counter Islamophobia at the UN.