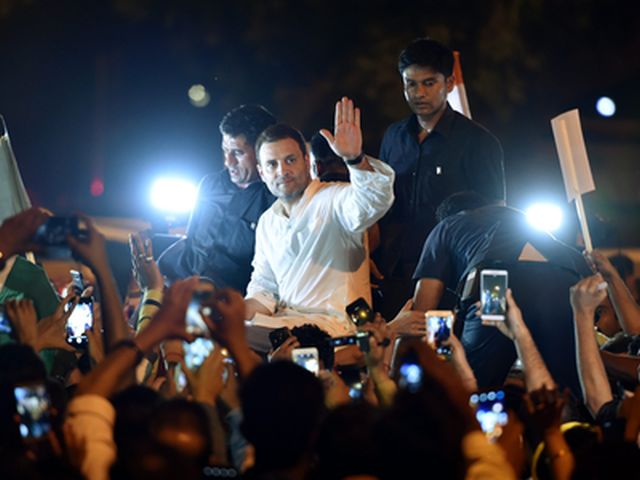 New Delhi : Congress President Rahul Gandhi led a midnight protest by the party workers at India Gate here against the “slumber” of Narendra Modi government over the rape incidents in Jammu and Kashmir’s Kathua and Uttar Pradesh’s Unnao and to seek justice for the victims.

The candle-light protest on Thursday midnight was called at a short notice and saw people converging at the India Gate in sizeable numbers to express their support.

Rahul Gandhi joined the protest around midnight. His sister Priyanka Gandhi Vadra and her husband Robert Vadra were also present, along with their daughter.

Similar protests had been held at India Gate after the brutal gang-rape of 23-year-old paramedical student Nirbhaya in 2012. Nirbhaya’s parents were also present at the mid-night protest on Thursday night.

Congress workers tried to come near Rahul Gandhi, giving hard time to the Special Protection Group (SPG) men protecting him. Gandhi sat atop his vehicle to briefly talk to the media.

He said there were repeated incidents of violence, rape and murder of women in the country.

“We want the government to take action. Today, women are feeling insecure to move out of their houses. Somewhere a child, a woman is raped, killed and we want that the government should resolve this. The women of the country should feel safe,” he said.

Gandhi said it was a national issue and not a political issue.

“This is an issue concerning women,” he said, adding that people from all parties as well as the common man was at the India Gate.

“I only want to say that the atrocities being committed against women, the government should something about it.”

He said Modi’s slogan of “Beti Bachao, Beti Padhao” was a correct slogan. “We are saying that Narendra Modi should begin the task of protecting women of the country,” he said.

The Congress President had tweeted on late Thursday night about his intention to go on a candle march.

“Like millions of Indians, my heart hurts tonight. India simply cannot continue to treat its women the way it does.

“Join me in a silent, peaceful, candlelight vigil at India Gate at midnight tonight to protest this violence and demand justice,” he said.

The Bharatiya Janata Party (BJP) was apparently caught unawares about the protest, with Congress workers from Delhi and neighbouring areas rushing to the venue on the call of their party leader.

Congress leader Ghulam Nabi Azad said they were protesting to awaken the Modi government from its “slumber”.

Surjewala said the BJP-PDP government in Jammu and Kashmir failed to give justice to the minor girl raped in Kathua and the BJP government in Uttar Pradesh did not arrest a party legislator accused of rape of girl in Unnao.

The protest lasted nearly two hours. With the crowds making a rush towards Congress leaders, Priyanka Gandhi Vadra looked a bit miffed with their behaviour.