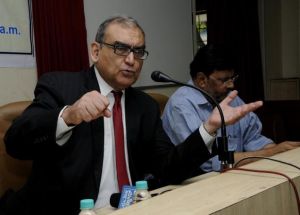 “I appeal to the Indian government to forthwith send back Sanaullah, a Pakistani prisoner who was attacked in a Jammu jail and is said to be in a coma, to Pakistan, as requested by the Pakistan government. This will be a humanitarian act,” Katju said on his blog.

He requested India and Pakistan governments to immediately set up committees to review cases of all prisoners in either country, and to set up mechanisms for early release of those convicted on alleged confessions or insufficient or suspicious evidence.

“Many such persons have been convicted on alleged confessions. Everyone knows how confessions are obtained in our countries (by third degree methods),” he added.

Ranjay, 52, was critically injured in Jammu’s Kot Bhalwal Jail after being attacked by an Indian prisoner Friday, prompting Islamabad to demand his immediate release and repatriation.

He was flown from Jammu to Post Graduate Institute of Medical Education and Research in Chandigarh for treatment and is said to be “critically ill”.

The incident took place a day after Sarabjit Singh, an Indian prisoner Pakistan, succumbed to grievous injuries sustained in a murderous assault on him in Lahore’s Kot Lakhpat Jail.—IANS.