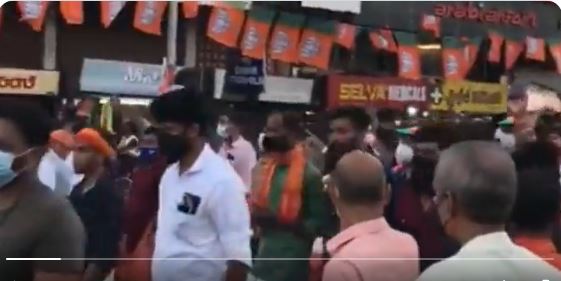 Several BJP workers raised anti-Muslims during a march taken out in Kerala’s Kannur on Wednesday. Taking note of the incident, the police registered a case against 25 persons under IPC 153 and IPC 143.

“There won’t be any mosques to pray five times,” was one of the slogans raised by saffron party workers.

The march was held by the Yuva Morcha functionaries on the 21st death anniversary of KT Jayakrishnan, an office-bearer of the Bharatiya Janata Yuva Morcha and a teacher at a school in Mokeri in Kannur. Jayakrishnan was murdered in front of his students on December 1, 1999 and a CPI (M) functionary was convicted for the murder.

Soon after the march, the Democratic Youth Federation of India (DYFI) and the Social Democratic Party of India (SDPI) approached the police, demanding strict action against BJP workers.

A case was registered under IPC 153 (promoting enmity among different groups on grounds of religion, race, birth, language, residence) and IPC 143 (related to unlawful assembly.)