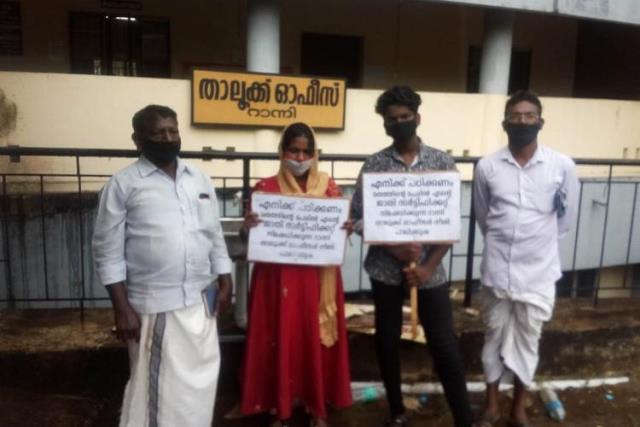 A Dalit family has been on a sit-in protest in Kerala’s Pathanamthitta district since Monday alleging that a member of their family was denied a caste certificate because of mentioning ‘secular’ in the religion column.

Vadasserikara, who belongs to the Pulaya community categorised as Scheduled Caste in Kerala, had applied for a caste certificate for his granddaughter for educational purposes, but it was rejected by the local Tahsildar. The official rejected the application saying that a certificate cannot be issued as the applicant has mentioned religion to be ‘secular’.

The family maintained that the grandchild’s admission to a degree course, which they partially secured, would be cancelled if she fails to submit the caste certificate. They hope that their sit-in protest will make officials intervene at the earliest.

Vadasserikara’s family including his daughters and grandchildren do not practice any religion and call themselves secular.

The family had been receiving caste certificates that certified they belonged to the Pulaya community earlier. In 2015, when a similar problem arose, the family approached the State Human Rights Commission and secured a favourable order which states that he should be issued a caste certificate which states ‘nil’ in the column prescribed for religion.

“Though we showed this order to the tahsildar, he is refusing to give us certificates,” Kesavadevu added.

In 2010, Kerala government issued an order (396/10/PA) stating that a person may or may not choose to write religion and caste in Public Service Commission applications, SSLC certificate or while applying to aided or government institutions. It further states that “if one does not mention religion/caste, they are not eligible for allowances of the religion/caste.”

But the order does not clearly mention what should be done if one decides to mention caste alone and not religion. Notably, it is after the issuance of this order that Kesavadevu and family has on multiple occasions secured caste certificates over the past years.

“I have given a complaint to the Pathanamthitta district collectorate and officials have said that they will study the order and let us know if we can be issued a caste certificate. We are going to continue the protest till we get our rights,” Kesasvadevu adds.