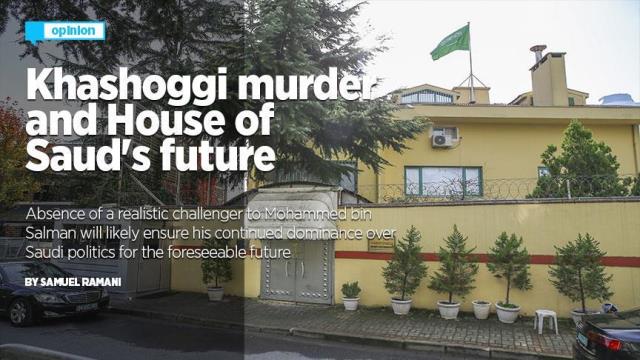 The writer is a DPhil candidate in International Relations at St. Antony’s College, University of Oxford. He is also a journalist who contributes regularly to The Washington Post and The Diplomat.

The perceived implausibility of the Saudi government’s official narrative on Khashoggi’s murder triggered widespread international criticism and caused major Western powers to openly debate the imposition of punitive economic measures against Saudi Arabia. The reaction of Saudi Arabia’s most important ally, the United States, has been followed particularly closely by Mohammed bin Salman and his political allies. The U.S. government’s initial response to Khashoggi’s murder was positively greeted in Saudi Arabia, as Trump emphasized the importance of arms contracts with Riyadh for job creation in the U.S. defense industry, and U.S. Secretary of State Mike Pompeo had a cordial meeting with senior Saudi officials.

The Trump administration’s dovish reaction to Khashoggi’s death was widely criticized within the U.S. Congress. In the aftermath of Khashoggi’s murder, neoconservative Republicans like South Carolina Senator Lindsay Graham and Florida Senator Marco Rubio, aligned with prominent Democratic Party lawmakers in condemning the Saudi government’s involvement in Khashoggi’s death and questioning the future of the U.S.-Saudi Arabia alliance. The emergence of a broad-based coalition of critics of Mohammed bin Salman within the U.S. Congress convinced the Trump administration to change course, by revoking visas against selected Saudi officials and considering sanctions against the perpetrators of Khashoggi’s murder.

How can US pressure Saudi Arabia?

While the impact of these actions on the U.S.- Saudi Arabia relations has thus-far been limited, the United States could exploit Saudi Arabia’s growing vulnerabilities and pressure Mohammed bin Salman in two main ways. First, the U.S. government could pressure Saudi Arabia to make a larger advance payment on its weapons deals with Washington, and use the threat of contract cancellations to spur Riyadh to action. Even though Saudi Arabia agreed to $110 billion in contracts with the United States in May 2017, only $14.5 billion of these deals has been confirmed by the Saudi government. Securing a larger advance payment from Saudi Arabia would provide more credibility for Trump’s arguments about Saudi Arabia’s economic importance to the United States, and also demonstrate that his rhetoric about Riyadh not paying the U.S. enough for defense is being matched with concrete action.

Second, Trump could offer Saudi Arabia a quid-pro-quo that the United States will refrain from imposing punitive economic measures against Riyadh, if Mohammed bin Salman takes tangible steps towards normalizing relations with Qatar. Even though U.S. Secretary of State Mike Pompeo urged Saudi Arabia to end its blockade of Qatar in late April and included both countries in its Arab NATO plan to contain Iran, Riyadh has dismissed U.S. concerns about Gulf disunity. As Khashoggi’s murder has reinforced international concerns about Mohammed bin Salman’s destructive impulsivity, U.S. policymakers are in a strong position to convince Riyadh to ease tensions with Qatar, as doing so could help repair Saudi Arabia’s damaged reputation.

Enhanced relations with China and Russia?

The growing risk of U.S. punitive measures against Saudi Arabia over Khashoggi’s murder has caused some prominent analysts, like Al Arabiya General Manager Turki Aldakhil and the Eurasia Group’s Ayham Kamel, to call for a rebalance of Saudi foreign policy towards China and Russia. While this argument has diffused across the Saudi intellectual and business community, it has weak empirical foundations. Although China is Saudi Arabia’s largest trade partner, the Chinese Petrochemical Corporation has cut oil imports from Saudi Arabia over concerns about price manipulation and Chinese investors were frustrated by Mohammed bin Salman’s decision to suspend the Aramco IPO. There are also few prospects for enhanced China-Saudi Arabia defense cooperation, as Riyadh only purchased $20 million worth of Chinese arms in 2017, and Saudi Arabia’s military campaign in Yemen relies on U.S. technology.

The prospects for a marked improvement in Saudi Arabia-Russia relations are equally dim. On Oct. 18, Russian President Vladimir Putin criticized Trump’s unwillingness to criticize Mohammed bin Salman over Khashoggi’s murder, by arguing that it differed markedly from Washington’s immediate decision to implicate the Russian security services in Sergei Skripal’s poisoning. Although Putin corresponded with King Salman over Khashoggi’s murder on Oct. 25, lingering concerns about Saudi Arabia’s blockade against Qatar and doubts about the potential for a breach in the U.S.-Saudi Arabia alliance could ultimately weaken the Moscow-Riyadh partnership.

In the Middle East, the initial reactions to Khashoggi’s death sharpened regional polarizations. Saudi Arabia’s strongest allies, the United Arab Emirates, Bahrain and Egypt, praised the Saudi government’s handling of the Khashoggi investigation; while its leading critics, Qatar, Iran and Turkey challenged the Saudi account. While Al Jazeera’s extensive unflattering coverage of Riyadh’s handling of the Khashoggi case and Turkey’s insistence that Mohammed bin Salman gave dishonest account of Khashoggi’s murder, could further strain both countries’ relations with Saudi Arabia, a spiral of escalation is not the only conceivable outcome.

In recent days, Mohammed bin Salman has departed from his traditionally aggressive approach to international criticism by praising Qatar’s economic model and directly discussing the Khashoggi case with Turkish President Recep Tayyip Erdogan. Mohammed bin Salman’s unwillingness to further inflame tensions with Qatar and Turkey aims to showcase Saudi Arabia’s ability to act as a responsible stakeholder on the world stage, and deflect international criticisms of his foreign policy conduct.

In light of these dissenting views, Ahmad bin Abdulaziz’s return to Riyadh on Oct. 31 poses a considerable challenge to Mohammed bin Salman’s authority. The widely reported decision of the U.S. and British governments to provide security assurances to bin Abdulaziz suggests that Saudi Arabia’s closest Western allies are grooming him as a critic who can act as a check on Mohammed bin Salman’s impulsive actions on the world stage. Bin Abdulaziz’s internal support base appears limited at first glance, as he was one of only three members of Saudi Arabia’s allegiance council to oppose Mohammed bin Salman’s selection as Crown Prince. However, the widely mooted existence of Khashoggi sympathizers within the elite establishment and his ties to Western powers make him arguably the greatest internal threat to Mohammed bin Salman.

In spite of the influence wielded by these influential critics, their discontent is unlikely to pose a serious short-term threat to Mohammed bin Salman’s authority. The anti-corruption campaign caused no Saudi private businessmen to appear on March 2018’s Forbes Billionaires list. This attests to the diminished lobbying power of bin Talal and his allies within the Saudi private sector. Prince Turki al-Faisal, the unofficial leader of the Saudi royal family’s moderate wing, has also defended Mohammed bin Salman against allegations of his involvement in Khashoggi’s murder. Mohammed bin Salman also maintains firm control over Saudi Arabia’s security services and the absence of a vocal internal backlash against his dismissal of senior aide, Saud al-Qahtani, suggests that the Saudi Crown Prince’s internal position remains stable.

Although the Saudi government continues to deny involvement in Khashoggi’s murder, the case has sparked fears of unprecedented U.S.-Saudi Arabia tensions and left Mohammed bin Salman scrambling to defend his tarnished international reputation. Despite these uncertainties, the atmosphere of fear created by Khashoggi’s murder and the absence of a realistic challenger to Mohammed bin Salman will likely ensure his continued dominance over Saudi politics for the foreseeable future. AA

Saudi rulers behind ‘Israel model’ for Muslims in the world