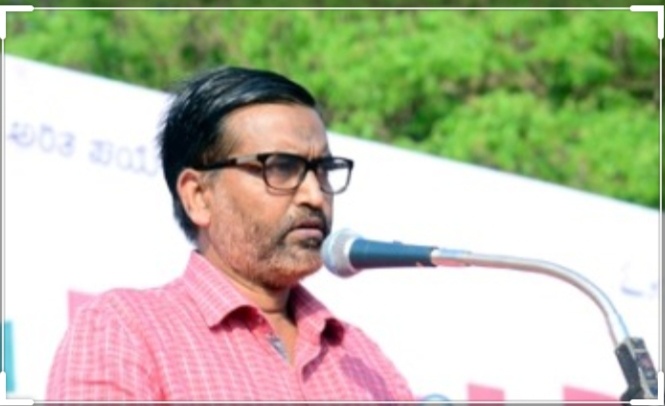 Karnataka is mourning the demise of KM Shareef, the former National President of Popular Front of India.With his demise, the community has expressed grief and a great sense of loss for he was a voice that spoke in favour of the oppressed.
Since the year 2000, KM Shareef – known in the public sphere as a writer, critic, translator, author, orator, and journalist – has been working tirelessly on the social front.

After graduating with a BSc degree, he spent four years in Dubai as a career person.He was a student of Mittabailu Jabbar Ustad, the general secretary of the Samasta Kerala Jamiatul Ulema, from whom he secured religious education.His father, the late Abdullah Haji, served as a Mudarris for 30 consecutive years in the Mittabailu Jamath.

In 2003, he served as the convener of Coastal People’s Union, an organization that was established as a coalition of various Muslim social organizations across Coastal Karnataka.

He played a prominent role in establishing ‘Prastutha’, a fortnightly news magazine in 2007, and also served as the editor-in-chief of the publication.Through this media publication, he constantly wrote on behalf of exploited communities.His writings delved into issues affecting the country, through which he warned that the country was endangered by communal fascism, capitalism, and imperialism.He has been instrumental in bringing new press campaigns through the Prastutha publication and introducing newfacets of journalism to the press.He was constantly encouraging and inspiring budding young talents to read and write.

Opposing the exploitation of women in society, he has consistently asserted that dowry is a social evil and one of the main causes contributing to women’s atrocities and exploitation in the country. His Kannada research work, ‘ಶಾಂತಿಗಾಗಿವಿವಾಹ'(Marriage for Peace), is by far the most prominent among his written works. In this book, he objectively outlines how dowry is in effect across the country and in what manner it is weaponized to commit atrocities against women.When he was the President of the Karnataka Forum for Dignity (KFD), he organized a series of state-wide, anti-dowry campaigns and encouraged young people to organize simple weddings and dowry-free marriages.

In 2006, KM Shareef spearheaded theKFD campaign ‘ಕೋಮುವಾದಿಫ್ಯಾಶಿಸ್ಟರಿಂದಕರ್ನಾಟಕವನ್ನುರಕ್ಷಿಸಿ'(Protect Karnataka from Communal Fascists), across Karnataka. When the ‘VidhanaSoudhaChalo’ convention was held in Bangalore on the occasion of concluding the campaign, a delegation headed by KM Shareef had met with the then Chief Minister Kumaraswamy and filed an appeal.This historic campaign, which occurred amid a series of sustained attacks against minorities in coastal Karnataka, resulted in the KFD organization becoming a household name in Karnataka.

KM Shareef, who sought no limelight or fame in the public sphere, was known for his straightforward, simple personality and disciplined disposition. He was in constant contact with other leaders who were actively fighting towards social justice in the activism circle. He continued to hold close associations with Dalit leaders, progressive figures, human rights activists, thinkers, and writers.
He was a man who had already possessed farsighted vision and ideas towards Muslim empowerment.

Shareef presented his paper titled, ‘Education and Empowerment of Muslims’ during the Second Beary Literature Conference.

KM Shareef is survived by his wife, three sons, three daughters, and a multitude of relatives, friends, and well-wishers.

CPI(ML), other groups rule out presence of ‘terror module’ in Patna’s Phulwari Sharif