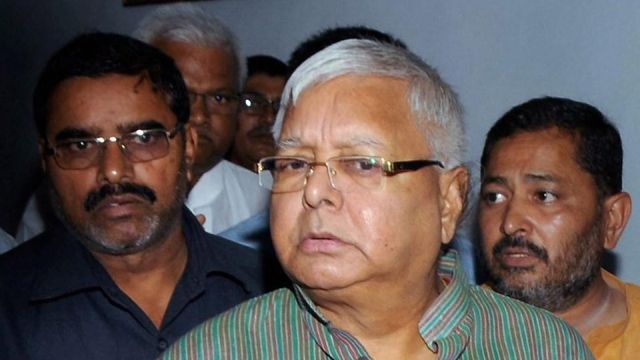 Ranchi : In a huge setback to the RJD, its supremo Lalu Prasad was on Saturday sentenced to three-and-a-half-years jail in a fodder scam case.

After three days of arguments on the quantum of punishment, special CBI judge Shivpal Singh pronounced the order through video conferencing.

As the CBI judge was delivering the sentence, Lalu Prasad, who is at present lodged in the Central Jail here, was standing with folded hands.

The court also slapped two fines of Rs 5 lakh each on the former Bihar Chief Minister. If the fine is not deposited, he will have to stay in jail for another six months.

The court convicted Lalu Prasad and 15 others on December 23 in the case relating to the multi-million-rupee scam.

Lalu Prasad was sentenced to three-and-a-half years imprisonment on offences of cheating, along with criminal conspiracy under the the Indian Penal Code (IPC).

He was also sentenced to the same period under the Prevention of Corruption Act (PCA). Both punishment will go simultaneously.

The sentences range from three-and-a-half-years to seven years imprisonment. The maximum fine imposed was Rs 10 lakh, slapped on three convicts including Jagdish Sharma, former Public Accounts Committee chairman, while they and three others got the seven years in jail too. Thre remaining nine were also sentenced to three and half years in jail.

The arguments on quantum of sentence had been going on since Thursday when those of five convicts were heard and another five, including Lalu Prasad, was heard on Friday.

While hearing arguments of quantum of sentence, the judge observed that the convicts “should be kept in open jail as they have experience in looking after cows”.

The CBI court had acquitted another former Bihar Chief Minister Jagannath Mishra and five others in the case, relating to fraudulent withdrawal of Rs 84.5 lakh from the Deoghar district treasury between 1990 and 1994 in then undivided Bihar.

Lalu Prasad was the Chief Minister of the undivided state from 1990 to 1997.

Convicted in another fodder scam case in 2013, he was sentenced to five years imprisonment and is on bail.

He was facing a total five cases in the fodder scam and the judgment in two more cases are likely to be pronounced within one month.

Lalu Prasad had to step down as Chief Minister post in 1997 following his arrest in the scam.

A total of 62 cases were filed by the CBI and majority of them were transferred Ranchi after Jharkhand was carved out from Bihar in 2000. The special CBI court has delivered judgment in 48 cases and several politicians, bureaucrats and others have been convicted.