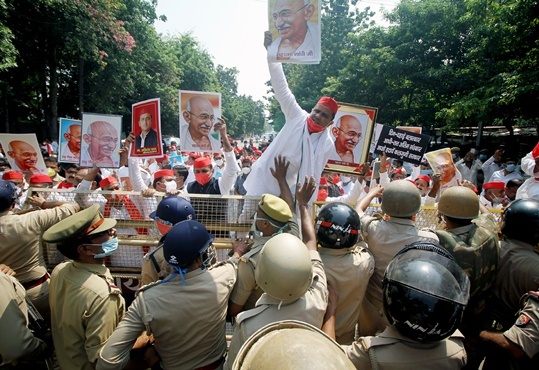 Lucknow, Oct 2 (IANS) Samajwadi Party (SP) workers on Friday faced a lathicharge when they were marching towards the Gandhi statue here to observe a silent ‘satyagraha’ in protest against the alleged deterioration in law and order, rising crime against women, unemployment and the recent farm and labour laws.

A heavy deployment of police was made around the GPO Park here, where the statue of Mahatma Gandhi is installed and the entire area was sealed off since the morning.

Barricades were put up around the Samajwadi Party office on Vikramaditya Marg to prevent party leaders from moving out.

Heated exchanges were witnessed at several places and over 20 party legislators, including Leader of Opposition Ram Govind Chaudhary and party state president Naresh Uttam were taken into custody.

Party MLC Anurag Bhadauria was hit by lathis, and he showed laceration marks on his back to media persons.

“It was to be a silent ‘satyagraha’ against the ‘suppression and oppression’ of farmers, youth, common man, and the opposition by the BJP and the state government in Uttar Pradesh. The ruling party has taken away our right to protest peacefully and this is the worst thing that can happen in a democracy,” Ram Govind Chaudhary told IANS.

Samajwadi Party state president Naresh Uttam Patel said, “The government has conspired to make the farmers mortgage their farms and become labourers in their own fields. In the name of an open market, the big traders and business houses will get the freedom to buy farmers’ produce at lower rates. The Mandi system is being abolished. The government cannot stop us from protesting on these issues.”