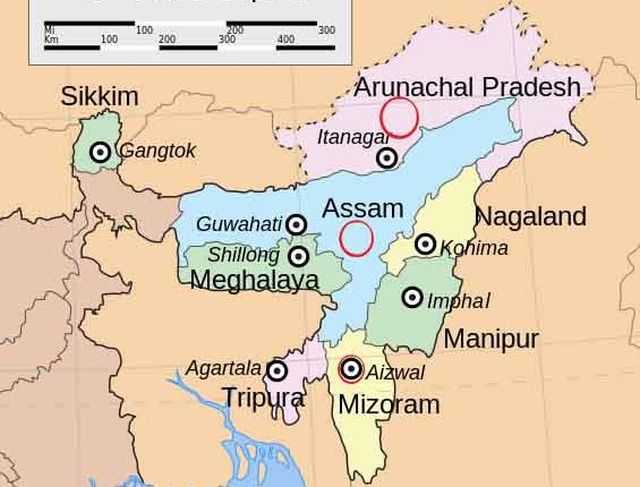 Aizawl : Lawmakers, both MPs and MLAs, representing India’s 10 mountain states, have noted with concern the “rapidly changing weather patterns” as a result of climate change and the “havoc it has unleashed” in the Himalayas, the north-east and other parts of India and the world and have resolved to work collectively to face its manifold challenges for the “greater good of our people”, including farmers, lay people and local societies.

About 35 such lawmakers gathered on Friday in the Mizoram capital to come out with a unique “Aizawl Declaration 2017” that resolved to “rethink and re-engineer” State Action Plans on Climate Change and “engage more fully in our constituencies” to see how it was affecting the lives and livelihood of local people, including those who depend on their livelihood on the land and forests.

Meeting at the Assembly House, legislator after legislator called upon the central government to engage more closely with local communities while formulating plans and policies in order to understand more fully how climate change was impacting them and what best could be done to mitigate its effects and adapt to its inevitable changes brought about global warming.

The Legislators’ Meet was held as part of the 6th edition of the Sustainable Mountain Development Summit (SMDS-VI) organised by the Integrated Mountain Initiative (IMI), a civil society effort involving the 10 Indian Himalayan mountain states and the hill districts of abutting states in association with the Mizoram Sustainable Development Foundation. P.D. Rai, the lone MP from Sikkim, is a major driving force behind this initiative.

Speaking at the event, Uttarakhand Forest Minister Harak Singh Rawat sought tailoring of polices to suit the requirements of hill states and said these state could learn a lot from the experience of other countries like Japan and New Zealand and what their societies are doing to mitigate and adapt to climate change.

This was also a refrain heard from Alfred Arthur, legislator from Meghalaya, who talked of eastern areas of his state bordering Myanmar being denuded of trees because of rising demand for wood in the plains. James Sangma, another legislator from Meghalaya, sought the incorporation of the knowledge of local tribals in government plans as they “traditionally knew how to live in harmony with nature”.

Pradeep Tamta, a Rajya Sabha MP from Uttarakhand, sought the creation of a ministry for hill states, a demand that found echo by many people during the three-day conference with ended on Friday. Jammu and Kashmir Deputy Speaker Nazir Ahmed Gurezi of the National Conference was angry that no effort was being made to understand the survival issues, like tree-felling, of local people who were victims of floods, landslides and other natural disasters.

Mountain and hill states constitute over 20 per cent of the total land mass of India with four per cent of its population living in the states of Jammu and Kashmir, Himachal Pradesh, Uttarakhand, Sikkim, Arunachal Pradesh, Nagaland, Manipur, Meghalaya, Mizoram and the hill districts of Assam, Tripura and West Bengal.

In a presentation to lawmakers, Mandira Kala, Head of Research, PRS Legislative Research, said climate change – with all its environmental, health and sociological consequences – was not just an international agreement happening in Paris, but is “happening in your state, districts, cities and constituencies….and policy decisions made now at state and central level must factor in climate changes considerations”.

Since 2011, IMI has been conducting the SMDS as a platform to bring together the Indian Himalayan region to discuss themes that are vital to the development and well-being of the region.

The Aizawl summit brought together lawmakers, academics, experts, other stakeholders to discuss shrinking livelihood opportunities and access to jobs in mountain states, growing outmigration and ways to build capacity and adopt international best practices to mitigate the effects of climate induced disasters and build a more resilient future for local communities.