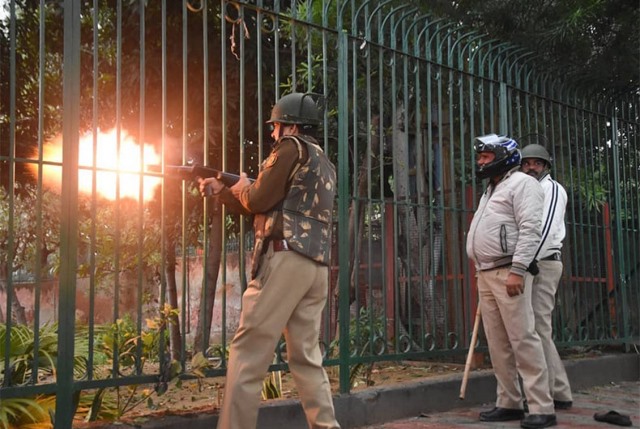 New Delhi: There were firing inside the halls of Jamia Millia Islamia university. Many students were attacked with rubber bullets. Police entered the library, hostels and even the mosque, male police officers also entered the women’s hostel, submitted Senior Advocate Dr Colin Gonsalves in the Delhi High Court.

pressed for an independent probe into the police brutality on several students as the Delhi High Court today began final hearing in petitions concerning violence that broke out in Jamia Millia Islamia following anti-CAA protests in December last year.

Senior Advocate Colin Gonsalves not only read out the testimonials written by several Jamia students on the assault and severe beating received by them from Police, he even played two videos to show the conduct of Delhi Police inside the university campus on December 13 and 15, 2019.

“They took our phones and camera.. it was almost a hostage situation. They used filthy language..I could see people bleeding and injured“, Senior Advocate Gonsalves read from the testimony of a student.

Advocate Mahmood Pracha also supplemented the argument as he argued that Delhi Police could not be considered as an impartial investigator in the matter. He sought a Committee headed by either of the four retired judges suggested by him in his affidavit.

Senior Advocate Salman Khurshid addressed the Court on the point of certain larger issues emerging from the violence.

These were with respect to the formulation of a protocol for law enforcement agencies to enter universities, right of students to protest, use of proportional force, Police approach in case of a university crowd etc.

Apart from seeking an independent probe into allegations of police brutality, the Petitioners have also sought compensation for those who have suffered serious injuries due to it.

On an important note, the Delhi Police have been changing their stand on the allegations against them. In all of their statments they tried to hold students responsible for the police crackdwon.