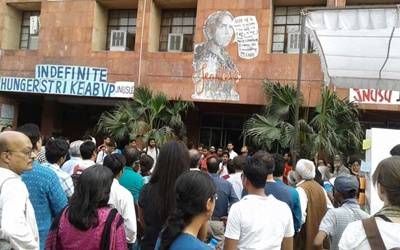 The Students Federation of India (SFI) and the All India Students Association (AISA) bagged the posts of President, Vice President, General Secretary and Joint Secretary.

The BJP-affiliated Akhil Bharatiya Vidyarthi Parishad (ABVP) and the Congress-backed National Students Union of India (NSUI) were far behind in all four posts, the sources said, while the newly founded Birsa Ambedkar Phule Students Association (BAPSA) gave a closer fight.

Mohit Kumar pandey, the presidential candidate for AISA-SFI alliance defeated his closest rival, Jahnavi of ABVP by a huge margin of 798 votes while the candidate for Vice-President’s post, Amal PP routed another candidate from ABVP, Ravi Ranjan Choudhary, the second best, by an
incontrovertible mandate of 2,300.

Satarupa Chakraborthy from the SFI, running for the post of General Secretary, won by a margin of 966 votes from his closest rival Vijay from ABVP who got 1,287 votes.

The only post where was seen a close contest between the candidates of ABVP and Left alliance was of Joint Secretary’s, where Tabrez Hasan of AISA, who got 1,533 votes against 1,263 votes received by Pratim of DSU.

This was the first student election in the campus since the arrest of JNUSU President Kanhaiya Kumar — of the CPI-backed All India Students Federation — on charges of sedition after a group of students allegedly raised anti-India slogans at an event in February.

A total of 4,865 votes were polled in the election.