Muslim Mirror
Home Culture Lipstick under my Burkha , why Not Janeu under my Kurta?
Facebook
Twitter
WhatsApp
Email
Telegram 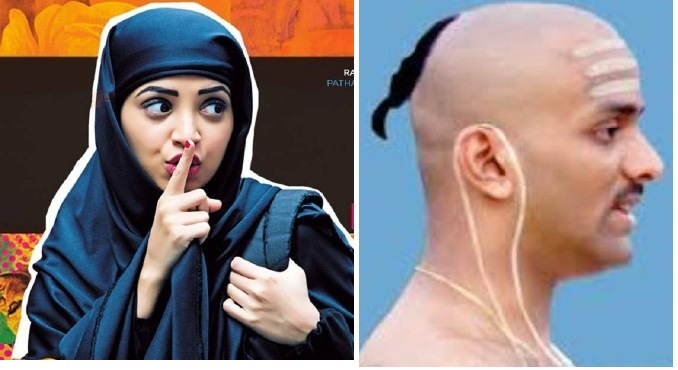 Lipstick Under My Burkha is a ‘by the Brahmin for the Brahmin’ movie to propagate the Savarna definition of the ‘oppressed women’. The whole movie gives you a clear picture of the story of women’s assertion on their personal and sexual liberation through brahminical patriarchal narration filled with Islamophobia by projecting Muslim men as a symbol of oppression and misogyny.

Many of you might have seen this controversial women-oriented movie. The story is about four women in a small town in Bhopal and their private life and desire for personal and sexual freedom and breaking the taboos. Rehana Abidi is a burkha clad college student, daughter of a tailor; Shireen Aslam, mother of three, a home maker and having a secret job as a sales girl;  Leela, a beautician living in her sexual fantasy while struggling for livelihood and Usha Parmar, a 55-year-old widow who falls in love with a swimming coach and expresses her sexual desires.

Yes, it is important to address patriarchy and liberation of women. But how to touch such issues, and address on what grounds and does it uphold the values of dignity, human rights, gender equality or women’s liberation. Is the narration free from patriarchy while making such an attempt? These are some of the key questions that immediately arise in our mind.

First, the movie makers need to liberate themselves from the brahminical stereotypes about Muslims and other excluded communities. As usual, they play with the body of Dalit-Bahujan women in the name of women’s sexual liberation. To achieve that goal the producer Prakash Jha and the director Alankrita Shrivastava have done hard work by portraying the so called lower caste/class/Muslim woman’s struggles in a ghastly oppressive atmosphere with a bunch of stereotypes. A lower class/caste Muslim woman has to wear jeans to impress her elite savarna friends and she needs to steal to wear a good dress to party with them. Another Muslim woman needs to hide her job, gets raped every night before she sleeps, and she is a baby producing machine who lives in such an oppressive atmosphere and a lot more as Hindu right wing often propagates. The movie brings a nasty picture about the Muslim man as a symbol of the oppressor as if he doesn’t have any other work than marital rape, illiterate on the condom use and keeps multiple relationships; even the father of Rehana Abidi is an authoritative person lacking love and affection. Not even a single Muslim woman/family has a good life. Such a pathetic narration! Everyone in the movie has performed well in their roles; I don’t want to describe it and it hardly matters to me.

They have deliberately used Islamophobic contents which would give good mileage to the average Indian audience particularly in the current political scenario. Shireen’s husband’s ‘Saudi return’ status makes him more ‘brutal’. Even when Shireen takes out a pistol from her bag, her burqa gives a terror touch into that momentary action. It clearly shows how much they have internalized the savarna definition of oppression using Muslim men as symbolic to women oppression.

In terms of social location, I don’t think any of these four women shown in the movie comes under savarna category. Leela, a lower caste/class (most probably) lives in her sexual fantasy world, make fake stories to earn money, her mother sits naked for body painting for years with no other option for livelihood. All these reinforce the brahminical patriarchal idea of bahujan women as sexual objects, but sadly in the name of sexual liberation.  However, the linking of Muslim women’s struggles with religion and the other women’s struggles just as part of tradition again shows the height of Islamophobia.

The title of the film itself is stereotypical by symbolizing burkha with oppression and lipstick with freedom which is also a product of brahminical patriarchy. The whole movie projects women as sexual objects and symbol of beauty than projecting their sexual liberation. For Dalit- Bahujan women liberation has a very serious meaning of its own. Brahmin savarna feminists have to relocate from their social location to learn from marginalized women’s assertions and their understanding on feminism. For them lipstick is a symbol of rebellion whereas for the marginalized women it may not be, it could be a symbol of oppression. How does lipstick liberate the girls from the marginalized communities being trafficked and forcibly put lipstick to please the customers? When lipstick is a symbol of oppression for girls in the sex market including devdasi girls what message are you giving to such vulnerable girls?

Is it a feminist movie? Brahminical narration actually doesn’t address patriarchy; because patriarchy is within brahminism itself. Deliberately choosing the women characters from the lower caste /class with a package of Islamophoba in such a disgusting manner by itself is a patriarchal attempt.

Is it a bold movie? There is nothing bold in this. It is easy for savarnas to make such movies focusing their lens on the Dalit Bahujan women’s lives. The oppressors can do anything with the oppressed, they can define their life, make any judgments. Have they lived their lives? It is their privilege to define, judge and comment about women from the marginalized communities selectively hiding the Brahmin patriarchy.

Now my next question: are savarna women sexually liberated or oppressed? Why are they hiding the damn Brahmin patriarchy? Why wasn’t even a single women from this class/caste portrayed in this movie? Why do these savarna liberal feminists always focus their camera on the lives of Dalit, Muslim women? Who give them the right to play with Muslim women’s body in such a disgusting way? Why don’t they bother about the sexual lives of savarna women? Why don’t you show that boldness to talk about the widows in Vrindavan or women under khap panchayats?

I personally know many women from elite –savarna- Brahmin background who are beaten up every day, who went through a number of abortions for the savarna men’s sexual pleasure, who are not allowed to go back to their parental homes to maintain their social status and even contracted HIV due to their husband’s multiple relationships. Most often I hear the screaming of a savarna woman and her kids from my neighbor’s home.

In an atmosphere where there is already too much Islamophobia and hatred in the air, the movie would definitely strengthen the biases and hatred towards Muslim men. If we look at the bombardment of abuses against Muslim women and men who commented against the movie on youtube channels on the movie review, it is easy to understand what message the movie gives to the larger audience. There is nothing wrong in saying that it is the brahminical propaganda by contributing to the Hindutva agenda of playing the savior of Muslim women by victimizing them.