Education is fundamental for development of any nation and higher education is a powerful tool for the eradication of poverty, boosting shared prosperity and making the society strong enough to face challenges of times. This basic fact was very well known to Muslim Ummah during Middle Ages, a Golden Period in Islamic History. “Seek Knowledge” was the known Commandment of Islam for Muslims and they followed it for almost eight hundred years.

Edward G. Browne (1862-1926) rightly observed that, “ when Caliphs of Baghdad and Cordova fostered education amongst their subject to the extent that every boy and girl of twelve could read and write, Barons, Lords and their ladies in Europe were scarcely able to write their names (A literary history of Persia, 1902). This was the time when Muslims around the world excelled in all the forms of knowledge for almost eight hundred years and therefore, Marquis of Dufferin and Ava rightly remarked,  “It is to Mussalman Science, to Mussalman Art and to Mussalman Literature that Europe has been in a great measure indebted for its extraction from the darkness of the Middle Ages.” (Speech delivered in India, 1890). Alas, what happened to Muslims that they distanced themselves from knowledge after 15th century and therefore lost their dominance in world affairs? Literacy languished in all parts of the Islamic World. According to historian Donald Quataert, Muslim literacy rates were only 2 to 3 percent in the early nineteenth century.  Even during the mid twentieth century the situation was not satisfactory. Only few countries like Egypt, Tunisia, Iran, Jordan, Kuwait, Malaysia, Syria, Turkey and Albania had the average literacy of more than 30 percent. Muslim areas under Soviet Union had off course had high literacy rates. This situation (fall) of literacy in the Muslim world was described by George Sarton as “Puzzling” and earlier extraordinary high literacy during early Islam “Baffling” (History of Science).

Muslims around the world during the last four century showed great interest in every aspect of life except education. Poetry, music, painting, ceramics, architecture, metal work etc became important activities throughout the Islamic world. But very little interest was shown to the fast developing modern education coming from Europe. Probably the most harmful act was their refusal to allow the use of Printing Press in 15th Century, a turning period for Europe. Through the Printing Presses, scientific revolution was made possible in all the sphere of scientific and industrial activity in Europe.

After a long spell of slumber, Muslims all over the world have started to understand that without modern knowledge and higher literacy their exploitation by the West cannot be checked.  Fortunately, education is re-emerging in the Islamic World during recent past. Muslim countries are taking strong steps, largely because of economic strength of Oil, for the eradication of poverty and illiteracy.

A redeeming feature is the fact that the Gender Difference (Men and Women) in literacy in many Islamic countries has also fallen sharply. At least 21 countries have the difference only 0 to 7% only.

Tertiary Education (Higher education in all the disciplines of knowledge) in Islamic world needs serious attention. King Mohamed VI of Morocco stressed that “…the integrated development of the principles of Islam and of scientific knowledge (tertiary education) must be achieved irrespective of gender” (UNESCO Conference, 2000).  Yes it is true that scientific awakening is under way in Muslim World. Research spending in many countries, like Saudi Arabia, Iran, Qatar, Turkey etc has been raised substantially. Tertiary Education in Western countries is generally above 40% whereas barring few countries like Turkey, Saudi Arabia and Indonesia, it is between 2 to 6%. Research spending in Muslim countries also needs serious attention. Only countries like Turkey, Saudi Arabia, Iran and Qatar have substantially raised funds for this purpose. Qatar is reported to have proposed the raise of the Science budget from 0.8% to 2.8% of its GDP.

Many Muslim countries have already established centers of higher learning (Universities) with emphasis on the modern sciences. According to The Times Higher Education World University Rankings 2018 (for 2016-2017), ninety six universities from Muslim countries have been listed amongst the top 1102 Universities of the world. This is definitely a positive sign towards the need of higher learning in the Islamic World although universities of only 18 Muslim countries could find places in the list. Hope other Muslim countries will find their names in future reports. Of the 96 listed Universities, 22 belong to Turkey followed by Iran 18; Pakistan, 10; Malaysia and Egypt 9 each; Saudi Arabia, 5; U.A.E. and Indonesia 4 each; Jordan and Morocco 3 each; Tunisia 2 and Algeria, Bangladesh, Kuwait, Lebanon, Nigeria, Oman and Qatar 1 each.

There is no doubt that Muslim World is taking necessary steps, largely because of economic strength of Oil Producing Muslim countries, to compete with the West for the eradication of poverty and illiteracy; still a lot is yet to be done. It is unfortunate that out of about 500 Noble Awardees in Sciences from 1901 to 2013, only two  are  from Muslim world, namely Ahmed Zewail (Egyptian) who got Noble Award in 1999 for his Chemistry Research and Aziz Sancar, also  in Chemistry, from Turkey in 2015. According to a report by Islamic Research Foundation International, U.S., had there been Noble Prize, of course under different name, during Middle Ages, all the prizes would have gone to Muslim Scientists (Report 2013).

A redeeming feature in the rankings is the fact that in forty one universities, female students are higher in numbers than male students. Eleven Universities have more than 65:35 female : male ratio with Imam Abdulrahman Bin Faisal University (22,257 students) of Saudi Arabia having the highest ratio of 81:19, followed by United Arab Emirates Univ. (7,492 students) 79:21,Qatar Univ., (13,342 students) 73:27 and Kuwait Univ., (37,752 students) with the ratio of 72:28. T (Please See the Tables). 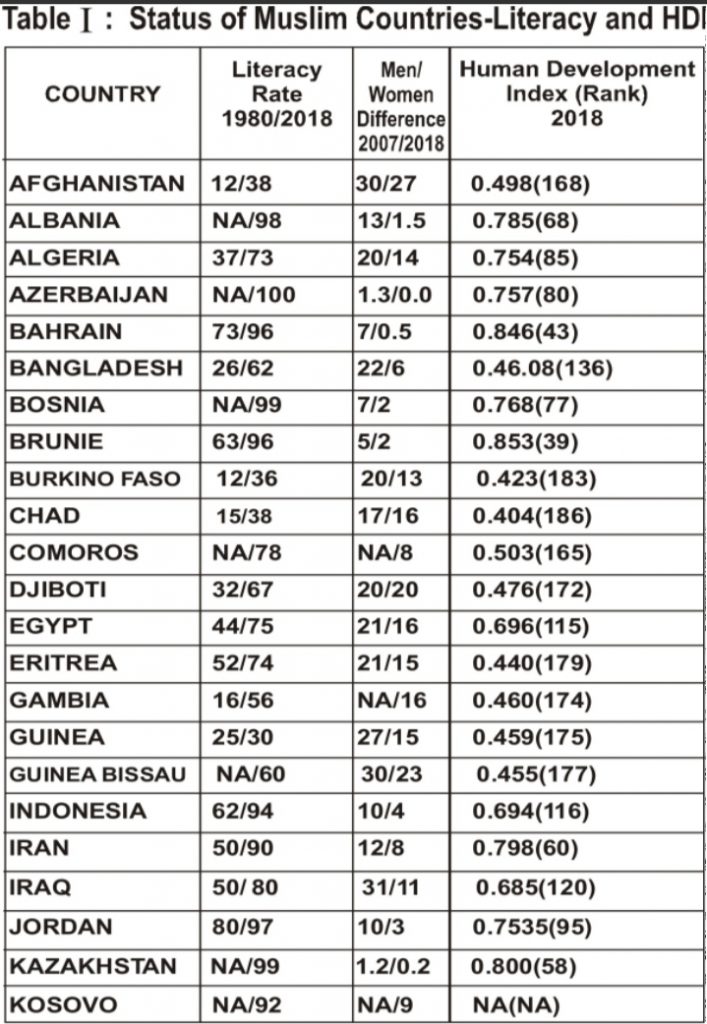 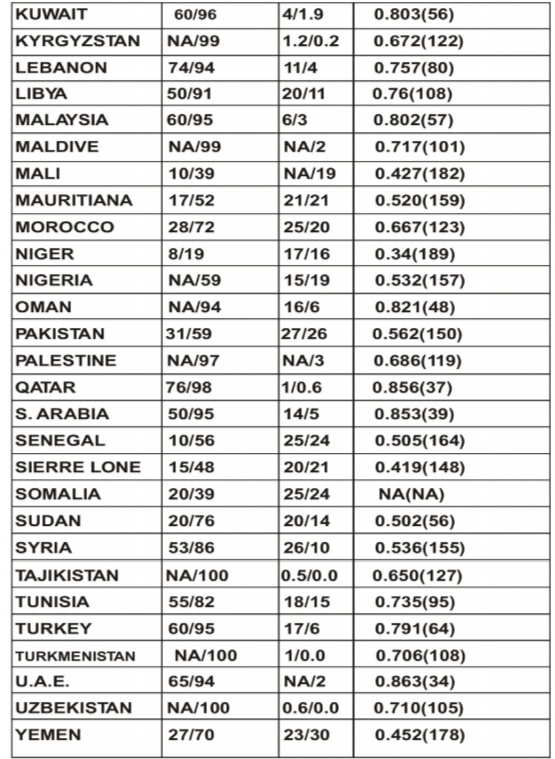 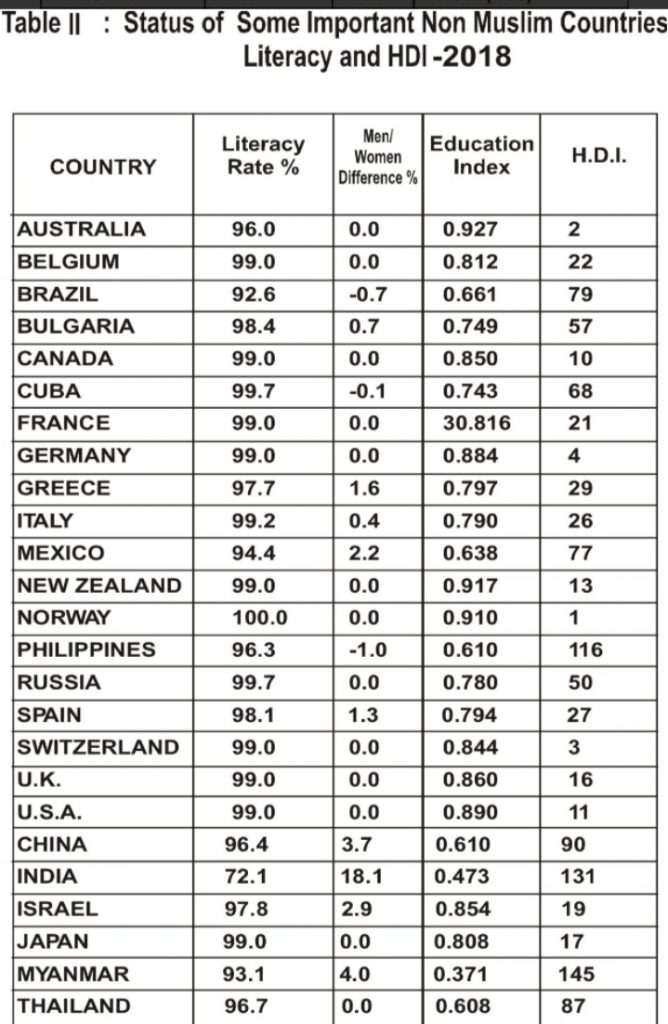