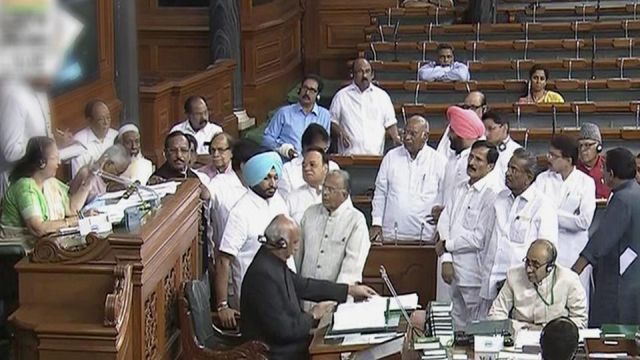 The MPs had thrown some torn papers towards the Speaker’s podium.

Soon after the house met at 2.30 p.m., the opposition members rushed towards the Speaker’s podium protesting against her decision.

Deputy Chairman M. Thambidurai, who was on the chair, urged the suspended members not to attened the proceedings but the opposition members were on their feet.

Amid the din, he adjourned the House for the day.

After the House was adjourned, the opposition members gathered around Congress President Sonia Gandhi and held discussions inside the house while the ruling BJP’s women members rushed towards the Speaker’s Chamber.

Earlier, the house was adjourned till 2.30 p.m. as the opposition members protested against the suspension of Congress members.

The six MPs — Gaurav Gogoi, Adhir Ranjan Chowdhury, Ranjit Ranjan, Sushmita Dev, M.K. Raghavan and K. Suresh — would have to remain out of the lower House for the whole of this week.

During Zero Hour, as the Congress MPs were protesting demanding a discussion on attacks on Dalits and Muslims by cow vigilantes, the six MPs tore up papers and threw them in the air and towards the Speaker’s podium.

“This conduct is not right. It is highly unbecoming and against the rules of the house which seeks to undermine the dignity of the House,” Mahajan said.

She said the members were “wilfully obstructing” the house and had caused disorder. She announced their suspension under rule 374 A for “five consecutive sittings”.

Earlier, the Lok Sabha witnessed noisy scenes as the Opposition members led by the Congress created pandemonium, demanding a discussion on the atrocities against Dalits and Muslims by cow vigilantes.

Congress members staged a sit-in near the Speaker’s podium throughout the Question Hour as she refused to permit a discussion on the issue.

While Opposition Leader Mallikarjun Kharge spoke on the issue as Zero Hour started, Opposition members trooped near the Speaker’s podium as a discussion was not allowed and kept raising “anti-government slogans” and threw torn bits of paper, irking the chair.

“This behaviour was not expected from Congress. This is shameful. There must be action against those who threw the papers. The members should be named,” Kumar said.