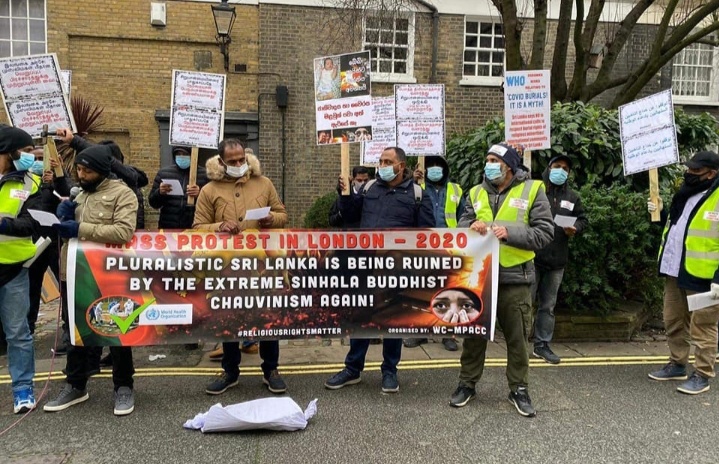 London : At noon today 400 Sri Lankan Muslims living in the UK and their supporters came together to hold a spontaneously organised demonstration to protest the enforced cremation of suspected Covid-infected bodies of Muslims and Christians who have died, in front of the Sri Lankan High Commission in London. The 400 demonstrators joined the protest in stages, of a hundred at a time to maintain social distancing. Below is South Asia Solidarity Group’s message in support of the protest which was read out at the demonstration by Baazir Rahman, one of the organisers of the protest.

“We at South Asia Solidarity Group, stand in solidarity with the Muslim, Christian and Catholic communities of Sri Lanka who are at present facing the thoroughly inhumane and arbitrary policy laid down by the Sri Lankan government, which outlaws burials and imposes mandatory cremations of people who are believed to have died of COVID 19 infections. The change in policy was sudden and deployed without any transparency or reliable scientific justification.

The death of a loved one, especially during these times of the pandemic, whether by COVID or otherwise, has now begun to strike fear into the hearts of persons belonging to minority communities. Mourning and grieving for their loved ones has become a fraught political issue, provoking great pain and anger amongst Muslims and Christians.

The deployment of this policy has resulted in a range of arbitrary practices, such as taking the body of the dead person, summarily, from the person’s home to the police morgue, or not even allowing the family any form of funerary rites, at times cremating it before the COVID 19 test results are even available and even cremating those who were not COVID positive. The invasion by the State, into the private grief of minority community members, in particular, the Muslim community, appears vengeful and it is clear such a policy is being carried out to appease extremist Sinhala Buddhist opinion which was already targeting the Muslim community as the spreaders of the COVID 19 virus in Sri Lanka.

We are told that the experts committee set up by the government for this purpose has recommended this change in policy. But this committee has been publicly criticized by the country’s leading epidemiologists and virologists, who were not invited to sit on the experts committee.. The WHO has clearly stated that burials are safe. Several other UN bodies and international human rights organisations and the Human Rights Commission of Sri Lanka have invoked international covenants on religious freedoms and rights of religious practice and have asked the government to desist from forcible cremations against the wishes of religious minorities, especially since such a policy has no scientific basis. Many civil society and religious groups within the country have also appealed to the government but all to no avail.

This will inevitably polarize the different communities even further but we see total indifference to the concerns of the minority communities on the part of the Sri Lankan majoritarian government. After the end of the long civil war of thirty years in which vast numbers of Tamil civilians perished, the majoritarian state turned its attention on the Muslim community. Many of its policies have had the effect of harassing and persecuting the Muslim minority community especially, in order to appease the Sinhala Buddhist nationalist vote bank it has nurtured.

The election of the President and the current parliament have triggered the dramatic politicization of the administrative organs of the state and the judiciary at such a rapid rate, in the service of the executive. The 20th amendment to the Sri Lankan constitution which became law recently consolidates virtually all state power in the hands of the President, rendering even parliament a subordinate institution. This leaves very little space for democratic forces in the country to challenge this form of untrammeled power.

The applications by eleven families seeking legal remedy to the issue of forcible cremations to the Supreme Court have been turned down by a majority of judges on the bench to proceed further for a substantive hearing. Having been frustrated in their efforts to take forward a legal challenge to this draconian policy, the community is gradually turning to forms of civic disobedience, where people are refusing to pay for the cremations as demanded by the government and are also beginning to refuse the ashes following cremation. Such is the trauma and pain felt within the communities.

This mandatory cremation policy is yet another step in the majoritarian agenda of the current government, rendering life for minority communities in Sri Lanka quite intolerable.We voice our opposition to this cruel and unnecessary mandating of cremations and stand in solidarity with the minority communities of Sri Lanka. We also stand in solidarity with those voices in Sri Lanka which are challenging majoritarianism and the growing authoritarianism, through the concentration of power in one executive institution.”