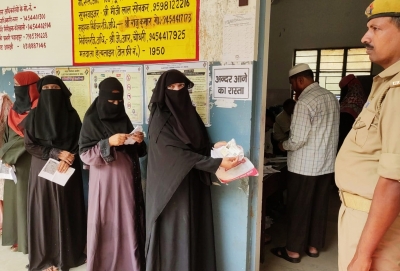 Lucknow : A low voter turnout marked the Lok Sabha by-elections in Rampur and Azamgarh on Thursday.

According to the official release from the chief electoral officer, Rampur had polled only 37.01 per cent votes till 5 p.m.

Mohd. Azam Khan and Samajwadi Party candidate Asim Raja also alleged that their supporters were being prevented from casting their vote.

Asim Raja said that polling was stopped in the afternoon in some polling stations and private vehicles were being punctured to prevent voters form coming to cast their votes.

In Azamgarh, the polling percentage till 5 p.m. was 45.97. Reports said that inclement weather in the afternoon was largely responsible for the low turnout.

The Lok Sabha seats in Rampur and Azamgarh had become vacant following the resignation of Mohd Azam Khan and Akhilesh Yadav, respectively, in March this year.— IANS