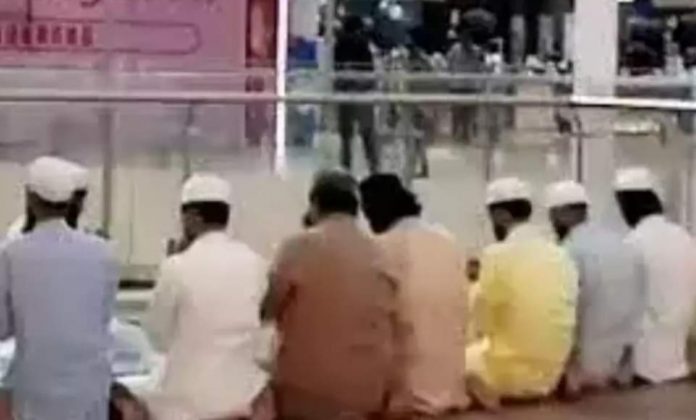 The 18-second viral video on social media about a group of people offering Namaz at the Lucknow Lulu Mall turned out to be stage-managed that was intentionally made to create enmity between communities.

According to the ‘National Herald’ newspaper that had access to the video footage, eight men gained entry into the mall together. They made no effort to look around the mall or visit any showroom. They neither purchased anything nor were interested in taking ‘selfies’ as most people do in the mall.

All seem to be in a hurry. The eight men moved together and started looking for a place to sit down and stage a sham Namaz. They first tried the basement, followed by the ground floor and the first floor, where they were stopped by the security guards. Then they proceeded to the second floor, which was relatively less crowded. These men immediately sat down to stage the Namaz. Among, them one got busy recording video. They hurried through the staged Namaz and completed it on record time, flat 18 seconds. Then the eight men exited from the mall in a hurry without looking back.

The CCTV camera footage has spilled the beans. It is revealed that the Hindutva forces, who were demanding closer to the Mall or being allowed to perform Hindu rituals there, were the actual miscreants as their cohorts’ were party to this crime.

CCTV footage also exposes that those staging the Namaz were Hindus and had no clue about how to offer ‘Namaz.’ Namaz is always offered to face the West but one of the miscreants was seen in the video facing in a different direction.  They were totally novices in the acts of the Muslim form of worship, as it takes seven to eight minutes to complete the ‘Namaz’, these men staged it in flat 18 seconds.

This led to suspicion that how a Muslim can perform Namaz in such a way.  Further suspicion was raised that Muslims are not interested in making videos and the purported video must be by some mischief-mongers.

The controversy generated communal heat in Lucknow when this video went viral on social media.  Hindu organizations had taken offense at the video and claimed that if Muslims are allowed to pray in the mall, they too should have the right to observe Hindu rituals there. A group of radical Hindus arrived at the mall demanding that they be allowed to read out parts of the Ramayana.

The Hindu group also alleged that the ground for ‘Love Jihad’ was prepared by the Muslims at this Mall because 80% of the men employed at the mall were Muslims while the women employed were all Hindus.

The Lucknow Police has conceded that the CCTV footage made it clear that those behind the crime were non-Muslims. They transferred some lower-ranking police officers for their failure to scan the CCTV footage at the beginning of the controversy. A fresh manhunt is launched to catch the culprits. In the end, this story has turned out to be “operation successful but the patient died!”

The second important point is that Hindutva forces that are on the prowl in many parts of India, can be controlled. The BJP politicians who have unleashed these forces to create a Hindu-Muslim tinderbox are struggling to put them on a leash. The Lulu Mall staged managed Namaz drama may have backfired now, but that is not going to end and soon this will be staged and managed again at some other place, and the ruling party will absolve themselves calling these radicals fringe elements. Well, this is new India i.e. “Post -Truth India – The Brand New Republic.”

Syed Ali Mujtaba is a journalist. His forthcoming book is “Post-Truth India – The Brand New Republic.”