Lucknow is certainly in the line of cities like Mumbai or Kolkata, on which there are numerous books written, on their respective people, places, monuments, music or folklore, but imagine these cities without monuments like Bombay Victoria Terminus or Kolkata Victoria Memorial and feel the bewilderment, this moment is now almost on the anvil for the people of Lucknow or UP! As the emblematic insignia of Roomi Darwaza aka Roomi Gate, the proverbial ‘Gateway to Constantinople’, is in dire straits, as the monument is very soon is to have a mighty fall, with no rescue-in-command, except for one or two babbling conservationists and the Archaeological Survey of India (ASI) waiting to be caught-off-handed! 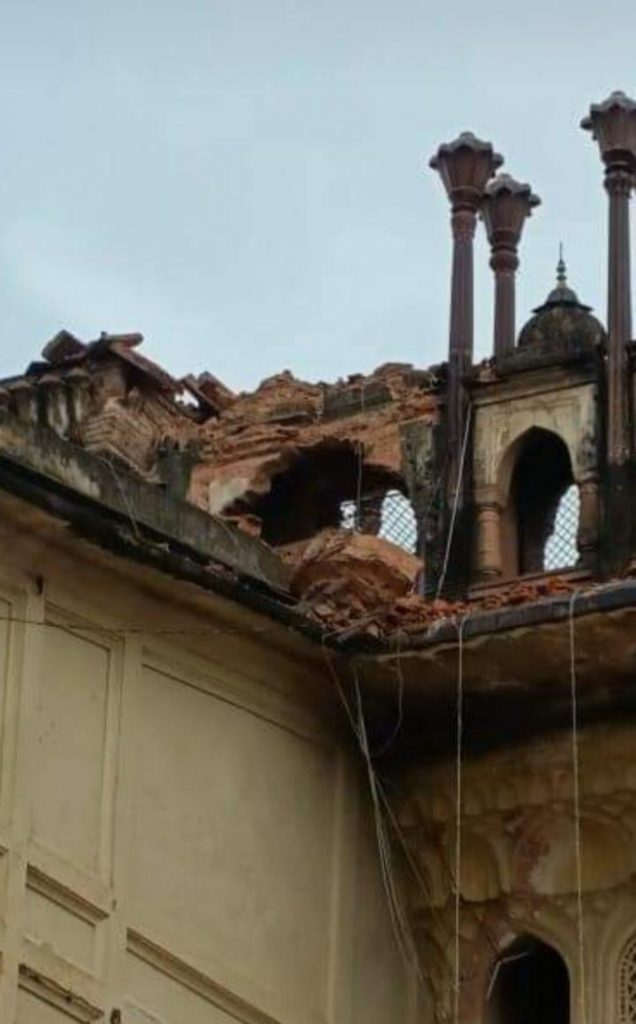 No one wants to wake-up, there is no defense mechanism and everyone is just waiting ‘the catastrophe to happen’, as the cracks on the very masthead of the iconic Roomi Darwaza, have been there since at 2003, and with now almost two-decades having gone past by, there is yet to be any rumbling inside ASI or the Husainabad and Allied Trust, whose chairman is ironically the District Magistrate of Lucknow.

This HAT was constituted as a custodian of the monuments like Bada Imambara, Chota Imambara, Roomi Gate etc since 1839, and perhaps, the upkeep of these monuments, under the gross apathy of ASI in togetherness with the district administration is the ‘worst of the worst’ state of affairs as nothing more detrimental could possibly happen to any set of monuments, across India, that too, under the very gaze of the government inside the state capital.

The tragedy is now to befall on Lucknow. Chota Imambara, it’s magnificent dome, is on a brink of collapse and is soon to crumble down, as on the very back of it, are ‘squatters sequestered’ in extreme violations of whatever norms and conditions ASI espouses for. Unscrupulous elements, land sharks and ‘colonizers and builders’ swank the area as their personal fiefdom while and there is not an iota of any ‘sense-of-belonging’ for these heritage sites visible inside people residing in the area. Given a chance, and everyone is hell-bound towards ‘encroachment’ to open-up even a bloody toilet!

The walls of Chota Imambara, by virtue of continuous digging, water connections etc, are reeling under the pressure and the structural-dome is likely to fall into rubble! No one will shed a tear and instead residents would be ready to stuff the remnants of the building ‘back-into-their-homes. Suggestions would afloat that a multistoried residential building be built, and Chota Imambara be shifted on the 14th floor, to symbolize with an auspicious figure, and that Chota Imambara would remain in the photographs. That’s it!

I am neither being euphemistic nor is an isolationist, but given the dehumanized and self-centered ‘great-people’ of Lucknow, anything how so ever untoward is likely to happen. The gate of Sheesh Mahal had long been sold-out, a market has come over it, until a new gate on a new place had got built, due to the secular policies of the erstwhile Akhilesh Yadav ( 2012-17) government who allocated hundreds of crores towards the beautification of the entire heritage zone, encompassing all these concerned monuments. Only until a few years back, Satkhanda, the ‘Tower of Piza’ of Lucknow was littered with ‘dumping-waste’ and a motor mechanic shops thronged inside, which fortunately, has been cleared, yet remains far from what is its rightful frame. This building was a marvel, built by Muhammed Ali Shah (1837-42) who wanted to traverse Lucknow into what was once the ancient Babylon.

The death-knell to Roomi Darwaza had begun to toll in 2001, when a 11 KV high-tension-electricity line was made to run below it, due to the newly constructed power-station built right opposite to it. It terribly also destroyed the Roomi Darwaza skyline, but ASI chose to look the other way! It should have out-rightly ordered its demolition. Apart from this, Roomi Darwaza has also a water-supply-line drawn below it too, and coupled with thousands of heavy-trucks/busses and locomotives, the vibrations caused on a daily basis, are enough to turn Roomi Darwaza soon into a crumbling edifice.  The authorities, as expected, will just pass-the-buck.

The breathing days of these monuments are thus numbered as on August 16, two domes out of their ‘480 streamed into necklace’, of Bada Imambara collapsed to the ground, and there were some uproars from certain quarters, which forced DM to immediately order the repair, but such steps are now too little and too late as the damage to the monument(s) has been done beyond repair, and only an effort on a war-footing can help safeguard them, or else, the biggest roof in the world, without a beam inside Bada Imambara, is soon to find its dreadful fate. This four-story building is getting worn-out day by day, as there is no plaster which is not peeled-off and the floor eroded on every floor! The big question, which arises, despite the traditional bureaucratic red-tapism, is to device the plan to anyhow save this structure from signing-off into oblivion?

The answer might lie in the effort to get Bada Imambara be listed as a UNESCO site to salvage its life for sometime more, but given the noxious political atmosphere in the country, where politics of retribution is the currency-of-the-time, such wishful thinking construes for nothing. Then, apart from everything else, what would matter the most is the ‘peoples of Lucknow’ endearment towards their cultural/historical/linguistic past, and which, by every standard, is also fast on the dwindling list too.

The writer is a former UP State Information Commissioner based in Lucknow.

UP ATS gets remand of two alleged terrorists