New Delhi, April 22: The road outside the Constitution Club was almost deserted and silent due to Sunday, but the evening inside the hall was reverberating with applauds and clapping at regular interval. The ceremony was simple but studded with luminaries from different walks of life. Renowned educationist and entrepreneur of Maharashtra Mr. PA Inamdar was launching a book Syed Shahabuddin – Outstanding Voice of Muslim India.

“He lit a light for the political discourses in the country. His contribution in the field of politics will be felt by the future generation,” said Mr. Salman Khurshid, External Affairs Minister. He was talking about 78-year-old former diplomat and parliamentarian Mr. Syed Shahabuddin.

“Some narrow minded people say he raised the issue of Babri Masjid and Personal Law for petty politics. This is wrong. The fact is we could not take full benefit of him as much we should have,” Mr. Khurshid said.

Turning to Mr. Shahabuddin who was sitting on the dais, Mr. Khurshid said: “You speak strongly and clearly. If someone who does not know you were a diplomat he would never know it from your personality. You have ruled over the hearts of men and women. We got in you a leader, an icon, a role model.” 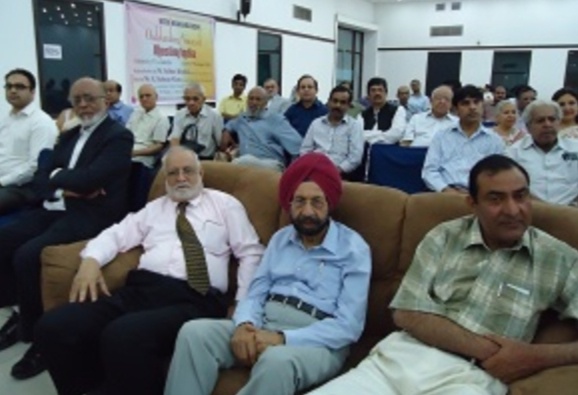 Earlier in his opening remark, publisher of the volume and himself a stalwart in the field of education, Mr. PA Inamdar said he was repaying a debt – publishing a book on his life was one way to appreciate the works and life of Mr. Shahabuddin.

“In 1992 I came across an article in Muslim India, in which Syed Shahabuddin sb wrote an analysis about a high court judgement which said  that  minorities have special right to establish educational institutions without prior permission of the government in India . Having finished the article I decided to set up a B.Ed. college without  permission of the Maharashtra government, using the benefit of Article 29 and 30. Soon  we received a notice from Pune University which objected the establishment of the College. We prepared the documentation with the help of  Sye Shahabuddin sahib’s writings highlighting the constitutional guarantees and the particular  judgment of high court in his  Muslim India magazine. Today my Azam Campus in Pune has 29 institutions with over 25000 students. I wanted to repay that debt and this presentation is part of my gratitude. ” said P.A. Inamdar, president of Maharashtra Cosmopolitan Education Society, Pune.

“Publishing a book on the life of iconic personalities like Syed Shahabuddin is one way to appreciate his works and tireless struggle,” said Mr. Inamdar.

“His stand, however debatable it may have been, had the stamp of complete honesty and total dedication for social, educational and economic upliftment of Muslim community. He became controversial because he was public figure fully armed with the constitutional equipments to challenge his adversaries,” said Mr. Inamdar.

Speaking on the occasion, Mr. Syed Shahabuddin recalled his diplomatic and political days.

“It is said diplomats tell lies and politicians mint money. But in 20 years of diplomatic career, I never told a lie. And despite three terms in Parliament (one in Lok Sabha and two terms in Rajya Sabha), I remained a darwesh. When I was resigning in the 1970s Atal Bihari Vajpayee was External Affairs Minister. He called me thrice and asked me not to resign,” said Mr. Shahabuddin.

In his presidential address Mr. K Rahman Khan, Minority Affairs Minister said: “Syed Shahabuddin sahib is an anjuman, he is an institution. He is fearless, frank and honest. His magazine Muslim India has vast materials for future historians.”

“He struggled for Muslims to get a place in India. He left a mark in every field he worked – whether it is diplomacy, politics, journalism or social activism,” said Mr. Khan adding that he is indeed outstanding voice of Muslims in India.

In his foreword, Vice President Hamid Ansari says: “A passionate espousal of causes he believed in, regardless of consequences, distinguishes Syed Shahabuddin from most of his contemporaries. As a result, he is as much understood as misunderstood.”

Mr. Ansari further says that Syed Shahabuddin is “A patriot to the core of his being, wedded in letter and spirit to the Constitution of India, motivated by the belief that selective justice leads to injustice, and propelled by an urge to rectify it meaningfully led him in his public life to seek avenues for furthering his quest.”

Mr. P.A. Inamdar has earlier published similar volumes on other stalwarts of the Muslim community including Dr. Mumtaz Ahmed Khan and Saiyid Hamid.

Syed Shahabuddin : The man who changed the culture of post independence Muslim Politics in India