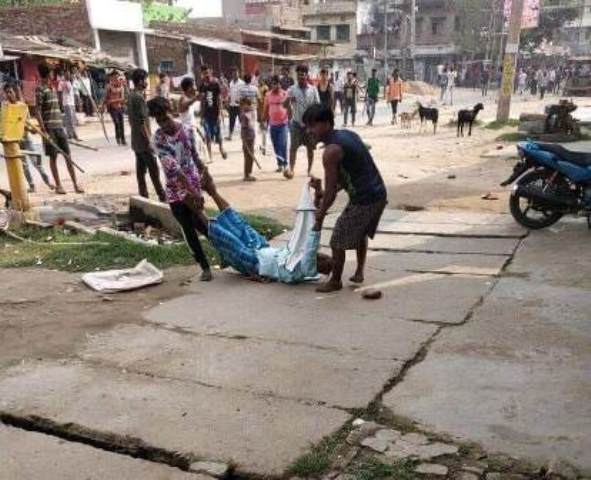 Patna: In a shocking incident, 80-year-old Muslim man was lynched on October 20 while returning from his daughter’s house during a Durga Puja procession.

On 20 October, Bihar’s Sitamarhi witnessed clashes between two groups after a Durga Puja procession was not allowed to pass through a particular area, resulting in the death of one person.

Zainul Ansari was dragged and beaten by the mob and then burnt alive. The incident was mostly ignored even though it happened in broad daylight but now pictures and videos have gone gone viral on social media.

The Police have confirmed Ansari was innocent and was targeted while passing through the Durga Pooja procession. Vikash Burman, the Superintendent of Police, Sitamarhi, told The Quint, “Ansari was not part of the two warring sides. He was likely targeted by the mob when he was in the locality.”

As per police sources, six FIRs were filed in the matter and 38 people have been arrested so far.Ironically, the cyber crime cell of the police have also sent a notice to Millat Times, the first news portal to have reported the incident, requesting them to take down the video of the incident.