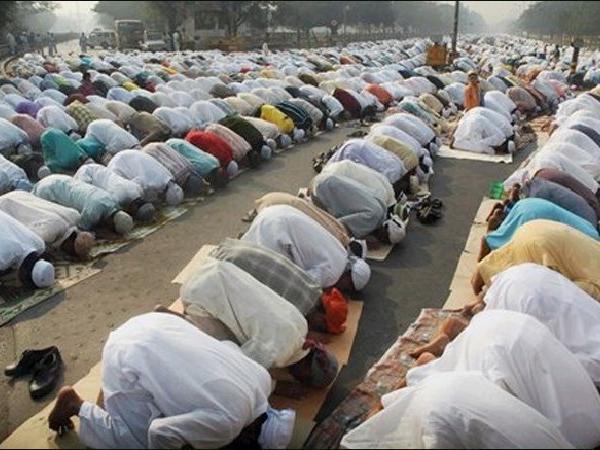 Mumbai : For the first time since the two years of the Covid-19 pandemic, lakhs of Muslims in Mumbai and other parts of the state trooped out in full strength to celebrate Eid-ul-Fitr and offer the traditional ‘Salat-al-Eid namaz’ (prayers) peacefully at thousands of mosques and Eidah grounds amid the looming loudspeakers row, here on Tuesday.

“To accommodate the huge rush of faithful for the auspicious prayers marking the end of the Holy Ramzan month of fasting, many mosques had arranged two-three congregations and prevented the crowds from spilling onto the roads or public spaces that could inconvenience others,” Juma Masjid of Bombay Trust Chairman Shuaib Khatib told IANS.

With the threats of the loudspeakers controversy lurking on the political horizon, the Maharashtra Police have taken full precautions and deployed tight security all over the state to prevent any untoward incidents, said Director General of Police Rajnish Seth.

After offering the Salat-al-Eid, it was time for feasting, wishing each other ‘Eid Mubarak’ with handshakes and hugs, partaking the special milk-vermicelli-dry fruits preparation of aSheer Korma’ and indulging in merry-making after a month of penance, fast and prayers.

In many areas in the city, the Muslims went to meet and greet police personnel and offered them ‘Sheer Korma’ as a mark of respect for their 24×7 services to the people.

Elsewhere, lakhs of Muslims and non-Muslims mingled freely, greeting, hugging and felicitating each other on Eid-ul-Fitr, displaying harmony and brotherhood for which the city is famed.

Muslim localities were decorated with festoons, moon and stars, homes, mosques and community buildings lit up brightly with twinkling fairy lights with the mouth-watering aroma of Eid goodies like ‘Sheer Korma’, ‘biryanis’, ‘kebabs,’ other special preparations wafting in the air.

The afternoon witnessed many non-Muslims going out to the homes of their Muslim friends or neighbours for feasts laid out, or restaurants and hotels offering special Eid menus for the entire week.