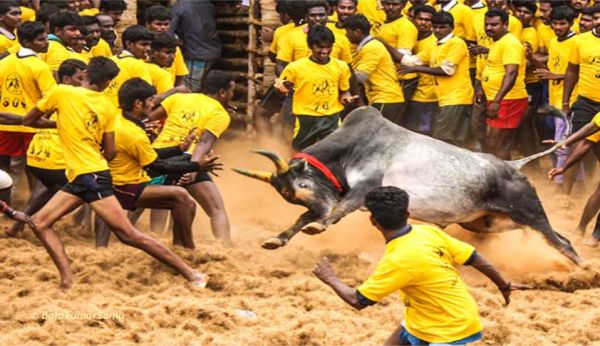 The tradition of Jallikattu is many thousands of years old in Tamil Nadu. The recent ban on this festive event has the entire state up in arms.

What typically happens during Jallikattu is that a bull which has been caged in for a while is suddenly released among a throng of people, much like the bull run in Spain. The bull goes berserk and runs at top speed into a crowd which hurriedly disperses and gives it room.

At the same time, the more daring of the enthusiasts in the crowd try and catch the bull by the hump and hang on. Only one person is allowed to hang on at one time and if he can go the required distance, he is rewarded with a prize. If he can’t hang on, the bull wins, evoking admiration for its strength and agility, making it a preferred stud in the village for servicing cows which may come into heat later in the year.

Participants are tested for alcohol and other stimulants for their safety. Bulls used for this sport are treated much like prize boxers — with supplemented diets and adequate care to ensure they are strong for many years.

It’s entertainment at its best in the village! Bulls come prepared with a diet and fitness regime to ensure that they put the best hoof forward on that day. Bull owners hope that their bull wins so that they can earn money through the year each time their animal is requisitioned for impregnating a cow in heat.

Villagers and onlookers compare performances and decide which bull would be best for their cows. Young boys who participate study best practices of approach and hanging on to the hump to retrieve the prized Jallikattu (package of coins) which is traditionally tied to the bull’s horn.

It must be reiterated that the bull owners have a lot at stake in protecting the bull, and take care that he is not mistreated. Pulling the tail, goading or unnecessarily inciting the bull in any manner is not permitted. Those who understand the Tamil people know that they are sticklers for rules with an advanced and humane culture. Whether it is art, culture, discipline, or economic growth — Tamil Nadu is among the best Indian states. Of course, one can expect some rash occurrences of injuries, even deaths, and some instances of animal mistreatment, but over a large state, over many years, these are the exception and certainly not the rule.

Let’s look at other traditional festivals in India. Every Diwali, blindness and even deaths take place. Faulty crackers sometimes blow up in one’s face. Manufacturing of firecrackers takes place in small spaces, using child labour and under sub-optimal safety conditions. Entire sheds blow up at times.

The festival of Holi is a joyous one but is also a menace for women walking alone or travelling in buses in some cities in north India where they are fair game for a colour rub and grope on their clothes and bodies by unknown, often inebriated males, under the guise of celebration.

Does this mean we ban these festivals? What about banning boxing, all forms of fighting where people get hurt? How absurd would that be?

The very purpose of Jallikattu is not to harm the bull or the human being, unlike the Spanish version where the bull is goaded and killed, bit by bit and very slowly.

In most of rural India, when a cow gives birth, a female calf is welcomed with glee. Males are considered a burden as they will neither give milk nor produce offspring in the future. They have a long gestation before they start ploughing the field and have to be fed without return until then.

The practice of Jallikattu encourages the nurturing of the male calf, with special care, for an income stream and prestige in the village. In fact, it prevents the cruelty of sending it off for surreptitious slaughter virtually days after birth.

It looks like the people of Tamil Nadu feel the same way. They have come out in huge numbers across caste, religion, gender, age groups and political party lines. They have actually taken leave from banks, offices and government jobs to express their unhappiness at this ban.

All decisions must be subject to a review especially when a large section of people have reservations against it and cogent arguments exist on either side. We live in a dynamic world where “the old order changeth, yielding place to new”.

Of course cruelty must be stopped. Of course safety must come first. Let us execute restrictions to eke out and penalise instances where people do not follow the spirit of Jallikattu and endanger the animal and themselves. Let us ban Jallikattu in those specific few villages where they do not follow the rules.

A blanket ban would be tantamount to banning all motor cars just because a few of them have accidents.

(Salim David hung up his corporate boots a few years ago and farms roses and organic vegetables near Hyderabad. The views expressed are personal. He can be reached at salimdavid01@gmail.com)—IANS