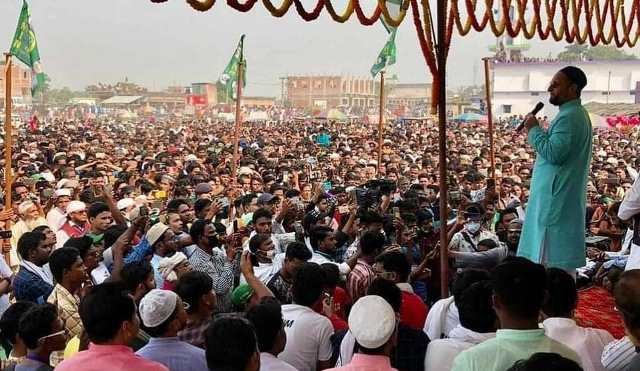 Bihar assembly election is marred by the allegation of rigging and irregularities. Opposition Mahagathbandhan (MG) has accused the state election machinery of ‘tampering and rigging’ in over  dozens of seats where the victory margin was low. However, the MG partner Congress party tried to make MP Asaduddin Owaisi-led All India Majlis-e Ittehadul Muslimeen (AIMIM)- which has registered an impressive performance by bagging five seats and has emerged as a political force to reckon with –  as a ‘fall guy’ for its flop show. And a section of Muslim community also blaming MIM for the loss of MG without going into exhaustive details of the outcome.

First, take a glance at the election results of 243-member legislative assembly.  The ruling NDA scraped through by getting  124 seats while the MG grabbed 111 seats and rest seats gone to smaller parties of which five grabbed  by  MIM.

Of the five seats MIM won, NDA was in the second place on four. Only one seat had MG as the runner-up. Muslims in all these five seats voted tactically. They knew that MIM MLAs would ultimately caucus with MG if it falls short of a majority by a few seats. Muslims only voted for MIM on seats where it was sure to win while they cast their vote en masse to MG because of this all the Muslim candidates of JD (U) faced defeat.

It is  be noted that  MIM was confined to only four districts Kishanganj, Katihar, Purnia and Araria of Muslim-dominated Seemanchal region in eastern part of the state which  still lags  behind in all social indicators despite solidly supporting the secular parties in the last 70  years.

Furthermore, only 20 candidates of MIM were in the fray while four candidate’s names were rejected at the nomination stage. Of these 3 candidates were from SCs and STs. But a wrong  perception  was created that Owaisi has  directly or indirectly damaged the prospects of MGB as nobody talks about the spoiler role played by Pappu Yadav and  Chirag Paswan in paving the way for NDA ‘victory’ which  was staring a certain defeat.

Since the MIM began its election forays outside Hyderabad and Telangana, it has been branded as BJP’s ‘B team’, ‘a vote-cutter party’ and a ‘facilitator’ for BJP.

But take a quick look at the 20 seats MIM had contested which shows that not a single seat has gone to BJP or NDA due to its presence and bust the myth of MIM as a spoiler party. 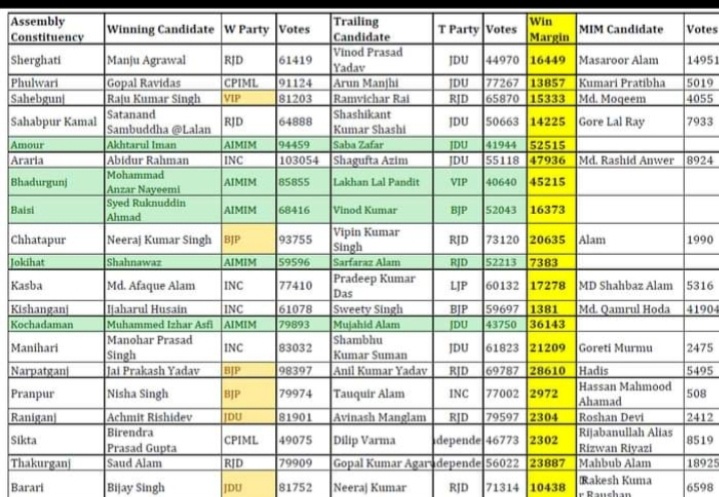 The only three seats went to the BJP and one seat to its partner VIP which had ditched MG at the last moment because of not getting sufficient seats.

The defeat of Congress’ young promising leader Tauquir Alam is unfortunate who contested election from the Pranpur constituency in Katihar district. Alam lost by a narrow margin of below 3000 votes to BJP candidate Nisha Singh,  MIM is not also responsible for his defeat but an an independent candidate Ishrat Parveen who secured 19746 votes  and  spoiled  the Alam’s chances.  Alam secured 77002 votes and his BJP rival 79974 while MIM candidate Hassan Mahmood Ahamad got only 508 votes.

According to journalist Saurabh Kumar Shahi ‘ of all other seats where MIM contested and lost to NDA, the margin of victory for NDA over MG is larger than the votes polled by MIM. Except for one seat where MIM polled around 7-8 votes more than the margin of victory by NDA. And on that seat, it fielded a Hindu candidate. This means even if MIM hadn’t fielded the candidates on these seats, NDA would have won”.

MGB also needs to introspect what went wrong in its failure.  Why its main social base Yadav did not vote to its Muslim candidates?

He told Muslim Mirror that Muslims, who had already a plethora of complaints with the ‘secular’ parties, underwent a bitter experience during their months-long protests against the citizenship matrix when they were left abandoned. ‘Secular parties’ showed reluctance to stand with them. The realisation to raise their own leadership – a sense that directly strikes chords with Asaduddin Owaisi’s narrative – was badly felt which reflected in the success of MIM on several seats.

He also highlighted the betrayal of Yadav voters to Muslim candidates. 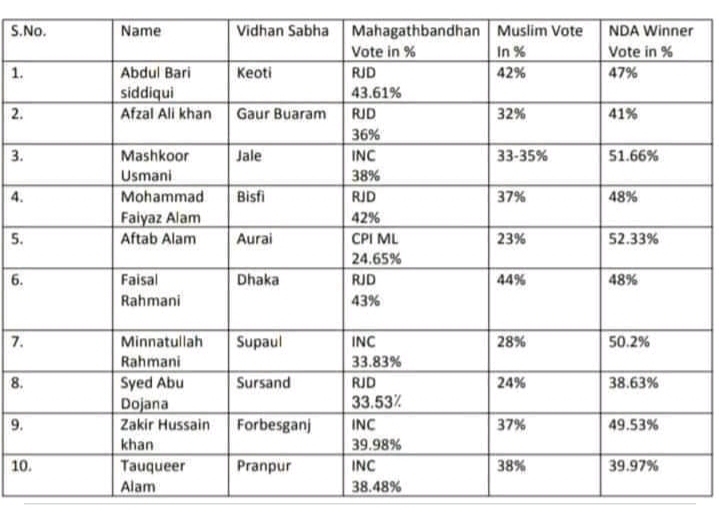 The Y of MY (Muslim-Yadav) combination has slipped. While Muslim voted to Yadav candidates as usual, the latter did not vote to the Muslim candidates in most of the constituencies across the state. The trend is not new, however.

“In 2015, out of 48 Yadav candidates the RJD had fielded, 42 managed to win, with huge support from the Muslim community, but the latter did not get Yadavs or other OBC castes in the same degree. Yadavs vote only to their community members irrespective of their political affiliation. They are mostly driven by their caste identity,” he added.

Echoing similar views, Patna-based  activist Khalid Anwar Purnaivi said  prominent Muslim faces of MG Abdul Bari Siddqui,  Mashkoor Usmani,  Aftab Alam and Abudujana  and others all lost from the seats where Yadav voters were in considerable numbers as  they did not  cast their vote  to Muslim candidates.  Because of this, Muslim MLA strength in the new elected house has come down from 25 to 19 despite the MG have gave 33 tickets to Muslims and the JD(U) has fielded  11 Muslims. Muslims accounts over 17 % of the Bihar  population mostly concentrated in north and eastern part of the  state.

Speaking with Muslim Mirror, Anwar, who extensively visited the state, said Muslims voted en masse in favour of MG because of this not a single JD (U) Muslim candidate won the election which fielded 11 Muslims. He also scoffed off that MIM’s presence was responsible for the consolidation of Hindu votes against MG.

It is because the BJP and Prime Minister Narendra Modi raised the communal agenda to a very high pitch and sought to communally polarize the electorate, he said.

The communally-tinged speeches of Modi during the 3rd phase election campaign in the Muslim populated Seemanchal region have reaped the intended outcome. His words “These people don’t like to hear Jai Shri Ram. The opponents of Bharat Mata have got united and are seeking votes,” in one of his speeches were highly communal and specifically targeting Muslims.

If one sees the results of all three phases, in the first phase 71 seat went to poll, MG in registered weeping victory while only in the third phase, BJP got more seats than the MGB.

However Adhir Ranjan Chowdhury, Congress leader in Lok Sabha, accused MIM of undermining its vote base in Bihar’s crucial Seemanchal region to help the BJP and described Owaisi as a “vote-cutter” and asked secular parties to be “alert”.

Owaisi retorted that people who called his party a “vote-cutter” have got a solid reply.

And those critical of Owaisi in the community needs to understand the political dynamics in Bihar.

In the 2015 assembly elections the Muslims did not take risk in order to stop the BJP’s juggernaut and had voted en-block to the Grand Alliance – JD(U) was part of the RJD led Mahagathbandhan.

Ashraf pointed out that this time, Muslim voters got the opportune moment to experiment as the ghosts of polarisation didn’t loom. Consider those Muslims, who voted JD (U), are far more damaging than those voted MIM.

However Patna based journalist Shams Khan doesn’t buy this argument . ‘Undoubtedly MIM  causes counter polarization . Although AIMIM has got insignificant number of votes in 15 constituencies in Seemanchal  yet the party has succeeded in pushing  a large number of neutral majority community votes towards the BJP, and it fared well in Seemanchal due to polarization and no one can reject it , Khan told to Muslim Mirror.

AIMIM local leaders against contesting all Muslim-dominated seats in Gujarat