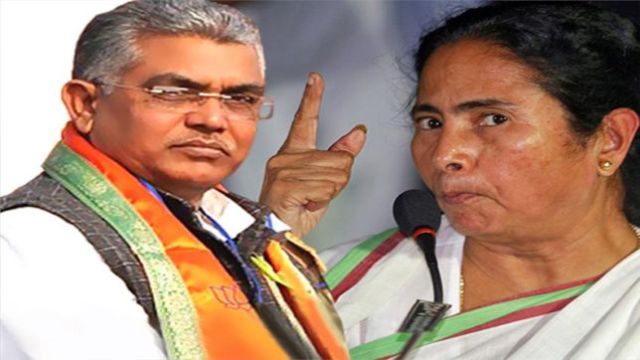 Kolkata : Ridiculing Trinamool Congress chief Mamata Banerjee’s call for “Delhi Chalo” to her workers, West Bengal BJP chief Dilip Ghosh on Monday said after her party’s performance in Tripura polls, she should better concentrate on Bengal and stop being a big mouth.

“Trinamool has polled less than 0.3 per cent votes in Tripura, which is even less than the votes recorded under NOTA (None of the Above) in the election. But still Didi (Banerjee) dreams of going to Delhi.

“Her party has shut shop in Manipura, its shutters have come down in Tripura, the signboard has been removed in Punjab… So, she should desist from taking about Delhi, stop being a big mouth and rather concentrate on Bengal,” he said.

About Banerjee’s efforts to cobble up a third front, Ghosh said: “Who will she join hands with? RJD leader Laloo Prasad is in jail, she cannot decide whether to holds hands of the feuding father or the feuding son of the Samajwadi Party. And so, she has now joined hands with the Shiv Sena, which she has been labelling as communal all these years.”

On reports that TRS leader K.C. Rao would come to Kolkata on Tuesday and talk to Banerjee, Ghosh said: “I would caution him that before reaching Bengal, he should read Didi’s history. Whoeve she has joined hands with has been ruined. So I urge KCR, not to hold hands with her.”

Responding to Banerjee’s allegation that the BJP and the RSS cadres were throwing meat at religious placed to foment communal trouble, Ghosh said: “Banerjee is seeing nightmares in Bengal after what happened in Tripura. Be it BJP, or RSS, whoever is involved, the court will give them punishment.

“But how can she say so? Cadres of Jamaat, SIMI and Al Qaida are roaming freely in the state. They are being arrested daily,” he said.

Asked whether the Tripura verdict — where the BJP has come to power by unseating the 25-year-old Left Front regime — would impact Bengal, he said: “It is already… It has already impacted Trinamool.”