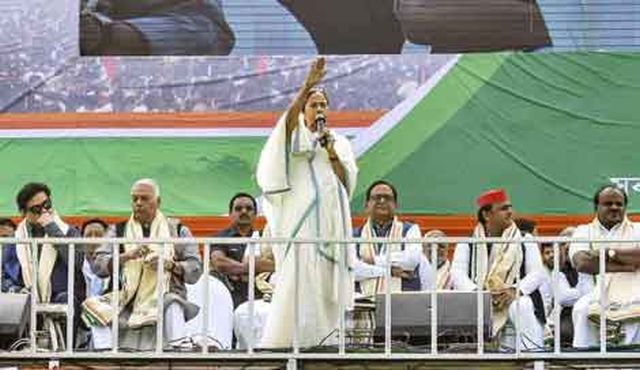 Kolkata : Even as West Bengal Chief Minister Mamata Banerjee went all out to bring leaders of 23 opposition parties on one stage and launched a stinging attack against the Narendra Modi regime at her ‘United India Rally’, political analysts said it might not be enough to catapult her as the prime face of anti-BJP politics as her party lacks a national presence.

Terming Banerjee “a national leader in her own merit”, political analyst Udayan Bandyopadhyay said the January 19 mega rally might have added more significance to Banerjee’s continuous tirade against the BJP government. But it is too early to predict whether she can emerge as the face of the opposition, with her party’s geographical limitation also being a hindrance.

“At the moment the rally might have added significance to her efforts. But her Trinamool Congress does not have any presence outside West Bengal so practically the party can’t have a lot of impact on national politics. But it is true that the more Lok Sabha seats Trinamool gets, the easier it would become for them to bargain in the post-election scenario,” Bandyopadhyay told IANS.

“She was rail minister under two governments and also a long term MP. She is a national leader in her own merit. But it is too early to say that she would be the face of the opposition. The alliance would need more time to materialise,” he noted.

The analyst claimed most of the opposition leaders attended Banerjee’s rally to fulfil their personal agenda and said Banerjee has to give these personal agendas suitable political articulation to lead them.

“Most of the leaders have come together to protect their self-interests. They want to save their parties from getting marginalised. Leaders like (former prime minister H.D.) Deve Gowda and (Karnataka chief minister H.D.) Kumaraswami of the JD(S) came here so that their government in Karnataka can be saved,” he said.

“If she can give a political articulation to these self-interests, it can be of a different significance but the parties have not reached that point yet. That would be a post-election phenomenon,” said Bandopadhyay, a professor of Political Science in Bangabasi College.

Another political analyst, Anil Kumar Jana, claimed that Banerjee’s effort to lead an anti-BJP front may fail as most leaders have come to the alliance to put pressure on the BJP and might go the other way if they are helped out by the ruling regime.

“It cannot be said that Mamata successfully projected herself as the face of opposition. The absence of (BSP Chief) Mayawati, who is another prime ministerial aspirant, is also significant in this regard,” he said.

“It is very much possible that the likes of Chandrababu Naidu’s Telugu Desam Party and H.D. Deve Gowda’s Janata Dal-Secular, might backtrack on their anti-BJP stand and even form an alliance with them if the BJP negotiates with them. Banerjee’s anti-BJP rally and her efforts will lose its significance at that point,” Jana said.

However, Banerjee’s party leadership was convinced that she is now the face of the anti-BJP opposition.

“This rally in terms of attendance, duration and number of leaders is a record. She not only provided a common platform to the anti-BJP forces, but her efforts were also roundly appreciated by the leaders present on the dais.

“It’s a big achievement. Not only our party, the entire country now holds her as the prime anti-BJP face,” Trinamool Secretary General and state minister Partha Chatterjee told IANS.

The Bengal BJP leadership, on the other hand, said the people would reject Banerjee.

“She brought all corrupt leaders on one stage. Her party is the pinnacle of corruption in Bengal. It is a meeting of the corrupt, who are talking about destabilising a stable and honest government led by Modi ji. People will not like it. They will reject her,” BJP National Secretary Rahul Sinha said.

State CPI-M legislator Sujan Chakraborty claimed Banerjee’s “utopian dream” of becoming the Prime Minister would remain a dream as she has failed to convince the people about her credibility as an anti-BJP face due to her party’s “constant but secret understanding” with the saffron outfit.

(Milinda Ghosh Roy can be contacted at milinda.r@ians.in))