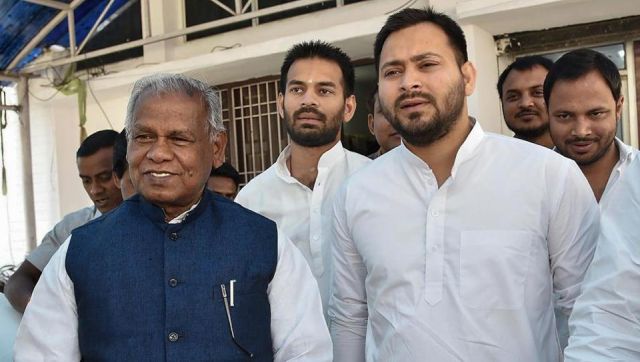 Manjhi said: “My party has quit the NDA and we will join the Grand Alliance. HAM-S has parted ways with the NDA.”

In the changed scenario, the Grand Alliance in Bihar now consists of the Rashtriya Janata Dal (RJD), Congress and the HAM-S. Besides, it also has a strong backing of the Janata Dal (United) faction led by Sharad Yadav.

Manjhi said he, along with former Deputy Chief Minister and RJD leader Tejashwi Yadav, will formally announce to join the Grand Alliance on Wednesday night at a joint press meet here.

“We will hold a joint press conference at 8.00 p.m on Wednesday where everything will become clear,” Tejashwi Yadav, who is the Leader of Opposition in Bihar Assembly, told the media.

Former Chief Minister and RJD chief Lalu Prasad’s wife Rabri Devi said that Manjhi was feeling suffocated in the BJP-led NDA and that her party would welcome him in the Grand Alliance. “We will give him the honour and respect he deserves,” she said.

Manjhi had stepped out of the Janata Dal-United in 2015, formed HAM-S the same year and forged an alliance with the NDA ahead of the Bihar Assembly polls in 2015.