Washington, DC – The Maryland state legislature has issued a citation recognizing the 75th anniversary of India’s independence from British colonial rule in 1947.

Adrienne Jones, the Speaker of Maryland’s House of Delegates, presented the citation at a celebratory event in Baltimore County on Saturday. The document recognized those who fought for Indian independence and how the nation “has shared with the world its unique and vibrant culture” during the past 75 years

“I wish you much success as you move toward your next milestone,” Jones said as she presented the citation to the International Society for Peace and Justice (ISPJ), a human rights nonprofit that organized the event.

Indian Americans from Maryland and Washington, D.C. joined the celebration, held at the New Life Healthy Living in Windsor Mill, to hear from distinguished speakers on India’s history as a democratic and pluralist nation, and partake in music and dinner. 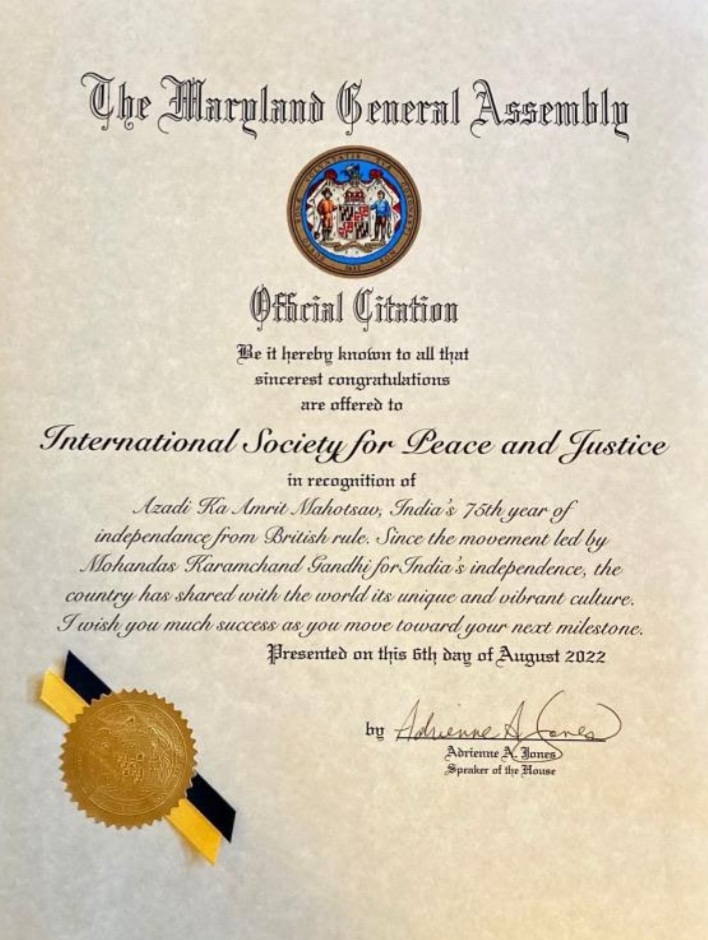 Arriving in India as merchants at the start of the 17th century, the British firmed up their rule over the next century-and-a-half. India became a British dominion in 1857 after a rebellion was brutally crushed. Ninety years later, India was freed on August 15, 1947, after decades of struggle led by Mahatma Gandhi and Jawaharlal Nehru, who became free India’s first prime minister. On that day, India was also partitioned, with the Muslim-majority country of Pakistan coming into existence.

In 1950, India became a republic and adopted a pluralist and democratic Constitution that gave equal rights to all citizens regardless of faith and other identity markers.

“India’s Constitution guaranteed there would be no discrimination on the basis of caste, creed, color or sex,” Ajit Sahi, IAMC Advocacy Director, said. “India was, is, and will be a pluralist nation that belongs to everybody.”

But today, the Constitution and its guarantee of pluralism and equality for all is threatened as Prime Minister Narendra Modi’s government pursues Hindu supremacist policies preferred by his Bharatiya Janata Party, a far-right organization.

The BJP is the political arm of the  Rashtriya Swayamsevak Sangh, a fraternal organization formed in 1925 with the goal of making India a Hindu nation. It was inspired by fascist movements in Europe in the 1930s, and a man with ties to the RSS assassinated Mahatma Gandhi in 1948. Modi is a long-time RSS member.

Religious minority groups, such as Christians, Muslims, and Sikhs, have faced discrimination, hate speech, and mob violence on Modi’s watch. Calls for the genocide of Muslims are increasingly being issued in India. Modi is accused of doing little to stop violations of human rights and religious freedom.

“We are facing a time in India, after 75 years of India’s freedom, when a few people have acquired the power, and the majority of the people do not have the capacity to resist,” Sahi said.

Dr. Sangeeta Simlote performed a number of patriotic Indian songs to the delight of the audience. She closed the evening with India’s national anthem, “Jana Gana Mana.” Simlote noted how Indians are proud of their heritage, including giving the world the numeral “zero.” She also expressed her love for the U.S. and pride “to be in America as Indians.” “We respect everybody,” she said of the U.S. “Human beings are valued here, like nowhere else.”