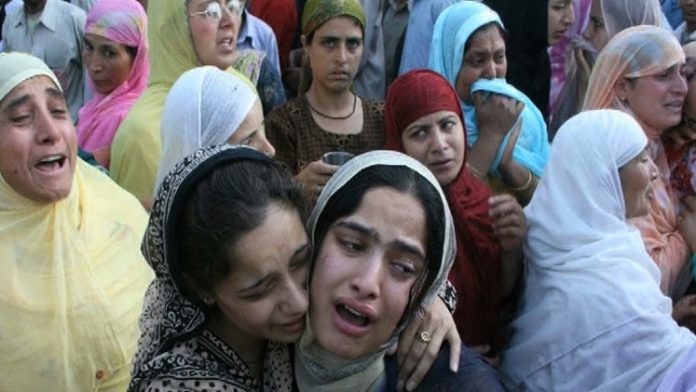 Democracy happens to be the most popular political system in recent times, and it owes its success, to an extent, to the grand reconciliation between a set of Liberal values on flowing from the Enlightenment rationality. However, the larger matrix where Liberal democracy gets to articulate these values happens to be that of a nation-state. This political design, which has recently come under layers of stress, in itself is adequate to accentuate the paradox of liberal democracy or the issues of democratic legitimacy as some scholars would like to put it as. The growing economic disparities, communalization and criminalization of politics, internal colonization and flagrant violation of human rights has made the sacred future of liberal democracy uncertain. It is in keeping with this paradox that one should try to understand how post-colonial colonialism, supposedly embodying anticolonial roots, manifests itself and how the idea of masculinist nationalism comes intrinsic to the very construct of the nation-state, with the aim of creating culturally homogenous polities all across, as the hyphen between nation and state finds itself in a decrepit position.

While India claims to be the largest democracy of the world, the pronouncement of “We, the people” in its constitution is symbolic of a complex relationship between the state and the people as the experience of democracy in India has been differentially distributed across many of its marginal population (Kaul 2019). At the same time as Seyla Benhabib has argued, that every act of self-legislation is also an act of self-constitution. However, in doing so, the will of the sovereign (which in this case is already complex in nature) can only extend over the territory that is under its jurisdiction; democracies require borders therefore (Benhabib 2018).

The democratic sovereign therefore in defining itself territorially, also defines itself in civic terms through citizenship and membership rights; thus, there can be people who enjoy full citizenship rights, while there can be sections among the people who are rendered passive members not enjoying full membership rights. Here is where a grand contradiction starts brooding out its head. The promises of liberal democracy, universality of human rights in post war systems and nation-state as its playing field where borders, boundaries, qualifiers for citizenship rights meet at crossroads- present a tension of conceptual unions and fault lines in enacting codes constituting the state, interpreting them to define the nation, with the democratic sovereign placed in a complex of performative democracy.

Recently we have been hearing terms like “masculinist-state”, “the strong-men”, “fifty-six inches” chest thumping and war cries all over. While one can identify this as a concurrent trend in global politics with the rise of the likes as Donald Trump, Putin, Erdogan, or Orban, and populism as the popular term, deployed in vogue to explain this- how radical a break this is with the history of nation-states’ , is a matter that can be contested at various levels, given the set of complexities that have always been intrinsic to the construction of nations.

For example, to a certain section or community in a larger population, the current crisis that the Liberal Democracy is faced with, is either a repeat of the historical injustices in the past or the variation would arise on account of the intensity or the degree of those injustices or wrongs, save for the changes in technology of modernity vis a vis modes of democratic performativity and electoral pantomime. For example, in India- Dalits, women and sexual minorities, in addition to the religious minorities have been at the receiving end of institutionalised injustices. The present moment does not bring anything new to them, save for the variation in intensity and political configuration vis a vis leadership. It is good to remember, that these categories can also overlap at points, inducing layers of disadvantage and injustice.

Placing Kashmir in the Indian Imagination

The example of Kashmir amplifies this point, as it appears “integral to the policing of contemporary nationalism in India” (Kaul 2019). While many scholars would like to argue and believe that the political veneer around the recent Bhoomi Puja for temple construction marks the rise of communalisation of India’s politics, one wonders then how can one explain the systematic exclusion and institutionalised discrimination that religious minorities have been facing at the hand of the state for decades now. A set of reports, with Sachar Commission been the prime one, would acknowledge the same.

So, while the recent political crisis, as many believe, accentuate an exhaustion of Secularism, if one is to look at the case of Kashmir, one would not need to look at the politics in the rest of the country to understand the rise of a communalised politics; also secularism does not necessarily share a polar relationship with communalism and both can have different spheres of working as well.

In Kashmir, whereas the pull has always been an integrative one on part of the masculinist state, at least territorially speaking, another attribute of nation-state and a compulsion of liberal democracy, irrespective of the Liberal values of autonomy or self-determination or liberty that form its premise, is evident in the fetish around Kashmir.

Kashmir-body in the Indian imagination thus features as collective desires of the Indian nation (Kabir 2010), evident in popularising terms like “red cheeks”, or supposed ease of “marrying Kashmiri women” post-abrogation of article 370, as commonly heard, etc. The xenophobic violence and othering enmeshed with an integrating-pull often crystallized against minorities in India emanates heavily from the pedagogy and the extent to which Indian cinema also has exoticized the oppressed sections and minorities living here. Kashmir has also been a victim of similar masculinist ‘nationalist’ libido which goes on to frantically sentimentalize and romanticize about the ‘beauty’ of Kashmir only to satisfy its crass sexualization. Almost all the institutions have covertly and overtly been complicit in perpetuating this violence against the Kashmiri bodies. As is evident from first Indian PM, Jawaharlal Nehru who once said,
“I wandered about like one possessed and drunk with beauty, and the intoxication of it filled my mind…. Like some supremely beautiful woman, whose beauty is almost impersonal and above human desire such is Kashmir in all its feminine beauty of river and valley and lake and graceful trees… sometimes the sheer loveliness of it was overpowering and I felt almost faint” (Anderson 2012).

This would not present the only masculinist element intrinsic to nation-state but also the populace-bordering by excluding the existence of the sexual minorities living in Kashmir in the collective-desires of Indian imagination, who are at a double disadvantage already. This is evident in the pink-washing that followed as a justification to abrogate Article 370, while at the same time enforcing a communication blockade on the same population, thereby completely isolating the sexual minorities. Those who needed a space to speak, had been braving mental health issues already, had been cut off from the only support system they knew (Queers in Kashmir say without internet, they are completely isolated, 2020). This should be seen as an extension of the logic of nation-state, already operative in the past at many levels. Historical roots of injustice and the Conceptual Crucible

Therefore, this postcolonial colonialism is not without its historical roots which have at moments, predating Indian independence, reflected the fault lines vis a vis political leadership, that India now faces under the current dispensation. The case of Kashmir and that of India cannot be written off without taking into account its history of colonisation. While the image of a trooper holding his weapon is the preliminary manifestation of that masculinist state for an ordinary Kashmiri, the unilateral tampering with many of the political agreements and accords, with the abrogation of article 370 without the consent of the people of Kashmir as a recent move, yet is another amplified facet of that masculinist state.

Thus, a popular section of Indian liberals believe that Kashmir has always been a litmus for Indian democracy and given its demographic character, a test for the its constitutional values, like Secularism too. While populism as a term has gained currency in academia as well as among a section of the intelligentsia to explain the recent political crisis in India, covering recent moves of the government in Kashmir under the same conceptual ambit, one wonders will such terms be adequate as a framework to explain the political turmoil that Kashmir has been made to face since decades now. Such usage of categories like Populism at various level also works to deny the structural violence that many sections of the population had to face and the systemic injustices meted out to them for decades. The present moment merely amplifies the same, with some discomfort to a certain section of the political elites. It is in such a dynamic political compound that Kashmir drags India and the set of popular-fancy categories in the conceptual crucible.

Meanwhile the Kashmir Question continues to act as a political puzzle for many thinkers who would like to exclude the plight of a section of population while understanding the stance of the nation-state that India is, through an illusion of radical or sweeping shifts vis a vis its political template, in the present moment.