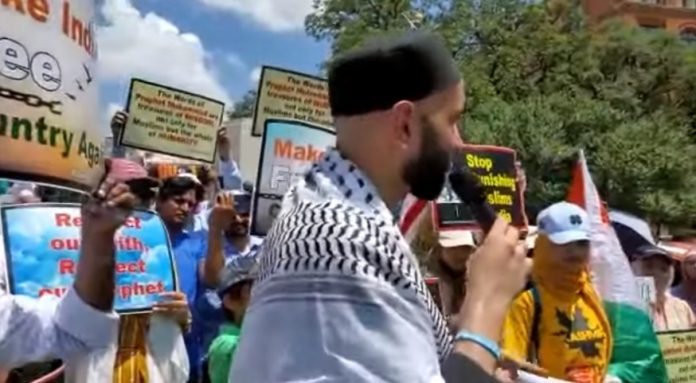 “We will continue to tell Modi, who is a wannabe Hitler, that you are a coward and that you are not welcome in Texas,” Suleiman told a cheering crowd. “We will hold elected officials accountable. We will hold corporations accountable when they deal with [India’s] fascist regime. We will not stand for the genocide of our brothers and sisters.”

Shaikh Suleiman spoke of the connections between the Hindu extremist ideology of the Rashtriya Swayamsevak Sangh (RSS), the ideological parent of Modi’s BJP, and Adolf Hitler’s Nazi Party, saying both promoted a hateful and shameless ideology.

“When we talk about the RSS we are talking about the child of Nazism [which] continues to rear its ugly head on this earth,” he said. “We are talking about people that are proud of their fascism. “India says very openly it wants to follow the Israeli model. If India consider the Israeli model, expert a palestinian resistance.”
 
Shaikh Suleiman also questioned why Modi, who was banned from entering the US during 2005-14, was now being embraced by politicians of both major political parties.

At the Bay Area protests, Shaykh Alaeddin El-Bakri condemned India’s persecution of Muslims, “I was talking to someone from Al-Aqsa Mosque in Palestine, and he told me to extend my support to the Indian Muslim brothers and sisters and tell them we are with them they are uniting us they are pushing us back,” he said.

Protestors in Dallas’ Dealey Plaza withstood hours of sweltering heat to amplify their voices marching together and chanting slogans of support for Indian Muslims. The slogans included, “We Stand With Afreen Fatima,” and “Stop Indian Muslim Genocide.” Fatima, a 22 year-old activist saw her house razed to the ground by bulldozers deployed by the Uttar Pradesh government, after her father was falsely arrested and accused of being the mastermind behind communal riots.

Protesters at both Dallas and the Bay Area called for a unified response from the American Muslim community to mobilize US Congress and the Biden Administration to pressure India to pull back from its severe persecution of its 200 million Muslims.

Speaking at the Dallas protest, Sabiha Shariff, an Indian American, urged the community to speak up before it is too late. “Don’t wait for the day when the Indian national flag is changed to saffron and the chakra [wheel] is changed to bulldozers.”

IAMC President Syed Afzal Ali urged the protesters to use social media to reach out to elected representatives and the Biden Administration asking them to act quickly.

“Now is the time for the Biden administration to step in. No country, ally or otherwise, should be given a pass for genocidal policies against its minorities,” Ali said.

“We call upon President Biden to immediately and publicly denounce the Indian government’s use of bulldozers and police violence against Muslims and to recognize India as a Country of Particular Concern for its ongoing and egregious violations of religious freedoms and human rights.”

IAMC Bay Area President Jaweed Khan said, “the world may not know yet what is going on in India, but if we continue to put together protests like these for people to see how many are truly impacted, we will be able to make a change.”