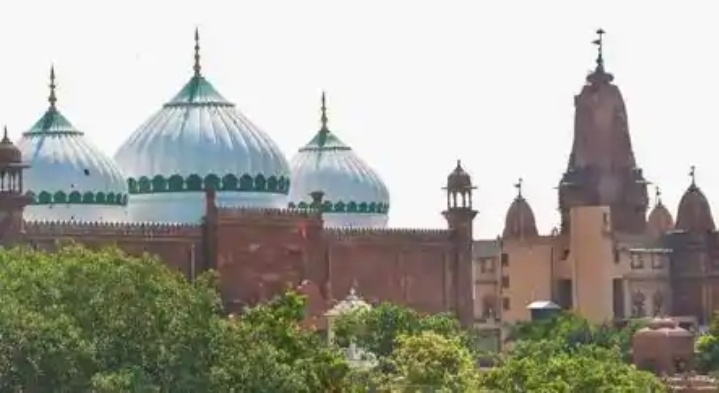 On September 30/2020 a civil court in Mathura had dismissed an entitlement suit filed by Vishnu Jain lawyer (AOR) Supreme Court of India, the spokesperson Hindu Front For Justice, seeking removal of Shahi Iedgah at Mathura adjacent to the Shri Krishna Temple in Mathura. Jain had claimed on Aajtak show that he had filed the case in his individual capacity , not as a member of RSS,VHP etc. Some priests of Mathura also issued a statement against Jain’s move, criticizing him to disturbing the calm and harmonious ambiance of Mathura city; the city of Shri Krishna.

Another suit was filed by Lucknow-based advocate Ranjana Agnihotri and seven others on behalf of the child deity Shri Krishna Virajman, seeking the removal of above said Shahi Iedgah .It was also again dismissed on 4 Octobar.2020 and dismissing this suit the local court observed that if each and every devotee of Lord Krishna was allowed to institute such suits, it would jeopardise the judicial and social system.

Yet the shrewd Hinduttva zealots did not stop yet, so another case was filed once again and the court did not dismiss it but accepted to look into its merit and postponed its hearing to 16 October.

During the violent and bloody Ram Mandir campaign, Hinduttwa protagonists usually , in the aftermath of Babri demolition, would chant loudly the slogan; Babri to jhanki hai, Kashi Mathura baqi hai. (Demolition of Babri is only a beginning ,the task of demolition of masjids in Kashi and Mathura is yet to be done.) And the acquittal of all 32 Babri demolition accused by the CBI special court, has emboldened the Hinduttwa brigade, that is why one of the accused namely Vinay Katyar prompted to issue a statement which says, “ now we will call a Dharam Sansad (a parliament of religious gurus and preachers)and will chalk out a strategy to go ahead for getting back the Kashi and Mathura mosques.”

One who observes the modus operandi of Hinduttwa forces keenly,clearly sees a looming threat on Giyanbapi mosque of Banaras and Mathura Iedgah. Because this pattern is suggesting the same technique and same method as was used in Babri Masjid case to build up the uproar about the issue, beginning by filing the legal suites then changing it into a mess by active media support and coverage.

Yes, a great legal hurdle in their way may be the law of protection of religious places( THE PLACES OF WORSHIP (SPECIAL PROVISIONS) ACT, 1991 ACT NO. 42 OF 1991)Babri Masjid was excluded from the law because that was already made a disputed place by the time the law was passed. So legally both the mosques being coming under the above said law are protected right now. Yet seeing the judiciary constantly compromising its partiality, and arguably leaning in its judgements to a mode of convincing and satisfying the majority sensibilities, we can’t help to dare say that who knows on which contrived legal pretexts the judiciary upturned the existing law or amend it to reopen the cases of Kashi and Mathura mosques.

Along with that, during the worldwide pandemic(Covid-19)the way the central government clandestinely crushing the resisting and dissenting voices culminated at Shaheen Bagh protest movement against infamous and discriminatory CAA-NRC law, by calculated detention of activists such as Umer Khalid, must be alarming for us. This is telling volumes that the Modi government is hell bent to impose CAA-NRC on the country. Further more from some corners, voices of imposing a Uniform Civil Code in the country are also being raised time and again. On this issue majority of secularists and so called liberals are also on the same page with Hinduttwa forces.

The fact of the matter is that the real culprit of Babri Masjid is the Congress party. The BJP has reaped the harvest of the Congress. God has inexplicably ended the 60-year rule of the Congress through the BJP and now Congress is struggling for its very existence. True that the same will happen to the BJP whenever God wills, But we should not be negligent.

The author is research associate  at Centre for Promotion of Educational and Cultural Advancement of Muslims of India A.M.U Aligarh.

No permission for ‘aarti’ at Mathura mosque