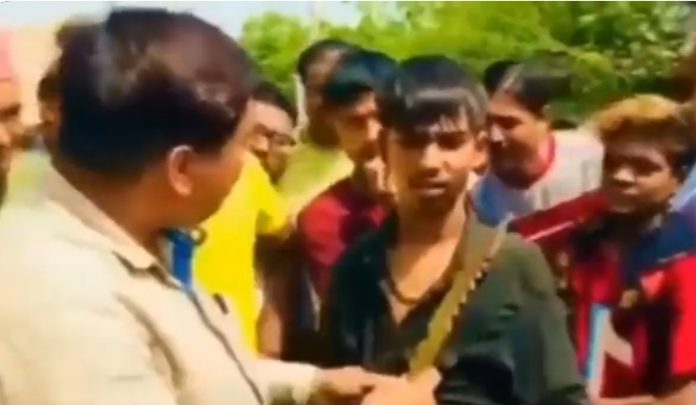 New Delhi : In a  twist  of the events in connection to Delhi riots,  a video of Md Ansar the ‘mastermind’ of Jhahangirpuri violence has gone viral on social media which shows him rescuing  a Bajrang Dal activist from the mob.

Delhi Police has arrested Md.Ansar in connection with #JhahangirpuriViolence. Ansar is being painted as a mastermind of #DelhiRiots by godi media. But in this video he can be seen rescuing a #BajrangDal activist from mob who was caught with a knife. pic.twitter.com/XXN6Nd4xCD

The police claimed that Ansar was allegedly one of the conspirators of the violence that erupted on Saturday evening during Shobha Yatra procession on the occasion of Hanuman Jayanti.

However speaking to IANS, Ansar’s wife said that her family has been residing in a locality of Hindus from the past 12 years and her husband was never involved in any kind of scuffles.

“Our neighbour is also a Hindu. They never had a problem with us. We happily live together. Our neighbour’s son’s health deteriorated during Covid times, and it was my husband who got him treated,” said Shakina.

Shakina’s neighbour told IANS that Ansar, never had a tendency for violence.

“He has always helped us. Treated my child and also financially supported us several times. Ask anyone in our locality, none would speak ill of him. Whenever there was some fight in our area, he used to always try to stop it,” said Kamlesh Gupta.

Delhi Police sources said of the 14 suspects arrested in connection with the violence, accused Ansar is said to be the mastermind behind the communal clashes.

Meanwhile a video of Ansar is being shared on social media in which he is seen rescuing a Bajrang Dal activist from the mob who was caught with a knife. The video has put Delhi Police in an embarrassing situation and also exposed its biaseness towards a particular community.