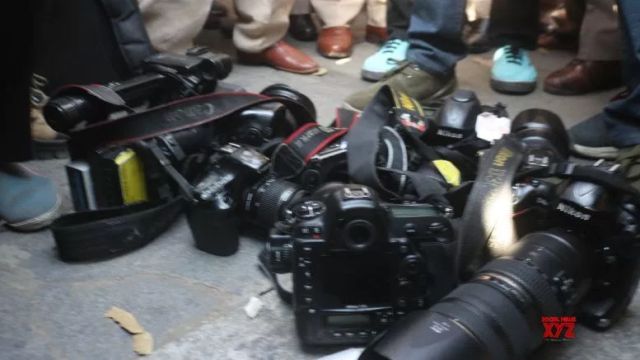 New Delhi : Journalist associations on Saturday demanded strict action against Delhi Police personal involved in assault and molestation of journalists covering a protest by students and teachers of the Jawaharlal Nehru University (JNU).

In a letter to Delhi Police Commissioner Amulya Patnaik, the Press Club Of India, the Indian Women’s Press Corps, the Press Association and the Federation of Press Clubs in India said journalists were beaten and molested despite telling police that they are from the media.

Condemning the assault, the associations said two women journalists were roughed up; one of whom was intimidated and threatened by women police officers and even more shockingly, the other journalist was molested by Station House Officer Vidyadhar Singh. A third male journalist has his arm in a sling after being beaten up by policemen.

They said the journalists were physically assaulted as they tried to take pictures of the protest, while police snatched their equipment and did not return it.

“Despite repeated pleas that they were journalists and even furnishing their identity cards, they were not spared.

“We demand that strict action against the police persons involved and the registration of FIRs on the complaints of assault and molestation, both of which have been filed at the respective police stations,” the associations said.

On Friday, JNU teachers and students held a protest march demanding suspension of professor Atul Johri, accused of sexual harassment, and protesting against the removal of some department heads and a coordinator for not complying with the University’s new attendance rules.

As the hundreds of protesting students and teachers from the University marched towards Parliament, the Delhi Police undertook a baton charge and fired water canons on the agitators near the INA Market.

Delhi Police on Saturday tendered their “deepest apologies” for the attack on media personnel when police undertook a baton charge on protesting students, with a senior officer stressing that police did not intend to obstruct the media from doing its job.