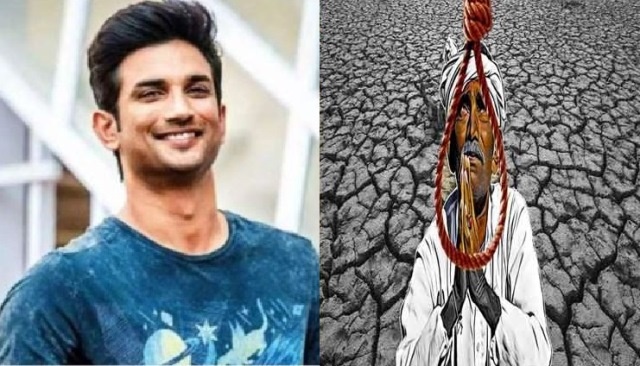 The front pages’ stories of daily Hindi newspapers focusing on news evidence every day, in connection of Bollywood actor Sushant Singh’s death by suicide, without even any factual proof but their focusing on farmers, farmers’ suicide and agrarian crises is zero since 2014.

But On 14 Jun, Indian news media got a single  breaking news story and the most important issue of the nation – the death of a Bollywood actor Sushant Singh Rajput by suicide. From that day it became a lead story of everyday on most of the news channels in India.

JusticeForRajput is the popular hashtag on channels like Republic TV and Times Now.  Have you ever seen this kind of hashtag for farmers on these news channels?  Have they ever talked about justice for farmers in the last five years?

Well, they are not helping even Sushant in giving him justice. What they are actually doing is just gaining TRP and distracting people from other important issues through their unethical, insensitive, indecent reporting around Rajput’s death. His death was initially believed to be suicide but the case has been handed to CBI for investigation.

The front pages stories of daily Hindi newspapers focusing on news evidence every day, in connection of Sushant Singh’s death, without even  any factual proof but their focusing  on farmers, farmers’ suicide and agrarian crises is zero since 2014.

A study by the Centre for Media Studies which analyzed six English and Hindi newspapers including Dainik Jagran, The Times of India and The Hindu for the course of two months in 2015 and found that the percentage of front page stories focusing on rural India was zero with the exception of 1.37% of stories by The Hindu in the second month. Looking at six broadcast news outlets including DD News, Zee News and NDTV showed that rural news did not receive more than 7 minutes of primetime on any of the surveyed news channels.

The National Crime Record Bureau (NCRB) of India reported that a total 296,438 Indian farmers had committed suicide between 1995 and 2015

More than 25,000 farmers have committed suicide in the state of Maharashtra between 2009 and 2016. And after 2016 the data was not available on numbers of farmer suicide cases.

Finally after 3 years the National Crime Records Bureau’s accidental deaths and suicides in India report released the data of farmers’suicide.

Suicide of farmers is increasing day by day. And who is responsible for this? Who will ask this question? Media? , is also a question now.

The Indian Express had reported in November, 2019 that the latest NCRB report does not enlist reasons for farmer suicides. In its previous reports, the agency had listed reasons under categories such as farm distress, crop failure, loans, family problems, illness, etc.

In 2018, several farmers’ organisations such as Jai Kisan Andolan, Rythu Swaraj Vedika, and Agriculture policy Advocacy Group Alliance for Sustainable and Holistic Agriculture jointly released a document titled Green Paper on farmers, farming and rural economy, which argued that the government – announced minimum support price did not cover the cost of cultivation for several crops.

The central government has failed in fulfilling its promise of providing minimum support price (MSPs) at 50 percent over costs.

The centre has set a goal to double farmer incomes by 2022, but how this goal would be achieved by this government when it could not even provide an announced minimum support price to our farmers? Who will ask this?

There are several government schemes for helping farmers, agricultural sectors, such as Pradhan Mantri Fasal Bima Yojna, Pradhan Mantri Krishi Sichai, Soil Health Card, and PM- AASHA but the question is that what is the purpose of these schemes when they are unable to stop the farmers from ending their lives?

Every single day our news media is discussing about actor Sushant Singh’s suicide case but they have no time to talk about rising farmers’ suicide cases.

Recently, Times Now anchor Rahul Shivshankar told political analyst Sumanth Raman to “not waste the nation’s and the viewers’ time” when he raised the issue of India’s economy and China’s occupation of Indian territory during a debate on actor Sushant Singh Rajput’s death case.

This shows that how this media made Sushant’s death an essential source to distract the nation from the other most  important issues of India, on which a proper discussion is needed. This media is just misleading viewers from real issues, which deserve their attention more.

In 2017, Tamil Nadu Farmers came to the streets of Delhi for pleading Central Governments attention towards their foremost demand to waiver off co-operative bank loans for the farmers .

The All Kerala Pineapple Farmers’ Association has called for urgent action after a pineapple farmer committed suicide on 22 August, to escape mounting debts.

The farmers’ demand is that the government help them by writing off the loans with good track for Pineapples cultivation, providing minimum support price of 25% per kilogram of pineapple and restructure debt repayment and help out with CSR.

The farmers’ protests in India could be successful if media covers their protests as they are covering Sushant’s case every single day on their news channels.

Now they are mere propagandists rather than journalists. For them, making insensitive distractions from real and important issues of the society, which really need to be covered by media, decently, became journalism.