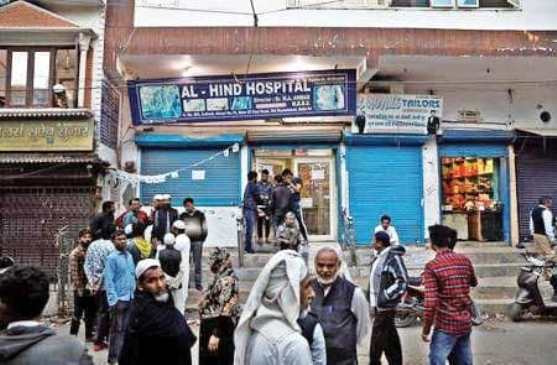 Prominent medicos body expresses solidarity with Dr. Anwar. Demands immediate withdrawal of the case against him and fair inquiry of Delhi riots by  retired SC judge

New Delhi: Progressive Medicos and Scientists Forum (PMSF),  a pan-India body of  medical professional and activists, on Sunday expressed  great shock and disbelief that  Dr Muhammad Ehtesham Anwar, who treated victims of Delhi riots in his Al Hind hospital, has been ‘framed’ by Delhi Police in a chargesheet. The medicos body demanded that the “false” case slapped against Dr Anwar be withdrawn forthwith and there be a free and fair investigation of all cases related to the February 2020 northeast Delhi riots by a judicial commission headed by a retired Supreme Court judge.

Dr Anwar’s hospital is located in New Mustafabad locality of northeast Delhi, and he has been booked by the police in a case for allegedly instigating the local people against the government on the issue of CAA-NRC (Citizenship Amendment Act-National Register of Citizens) which led them to stage communal clash in the area.

Dr Harjit Bhatti, National Convener PMSF, said it is shocking that Dr Anwar was booked in a false case by the Police who treated all injured persons irrespective of their faiths during the February communal violence.

“Our shock is even more profound because the PMSF had taken a team of doctors to his hospital where we provided medical aid to many of the riot victims. All persons whom we met there, including some local Hindus, other local doctors, community leaders and members of the press were full of praise for the tireless efforts of Dr Anwar in providing succour to the victims of riots without any distinction of religion.”

PMSF brought out a detailed report on the medical emergency resulting from the riots in northeast Delhi and recorded the remarkable role of Al Hind hospital and its proprietor Dr Anwar in alleviating peoples’ suffering, Dr Bhatti added.

Apart from various newspaper reports, and reports on riots brought out by different organizations and civil society groups, the important role played by Al Hind hospital and Dr Anwar was acknowledged by no less than the High Court of Delhi which gave a detailed hearing to Dr Anwar in a late night sitting and passed orders for reaching out the much needed help to the hospital for providing relief to the people.

The alleged crime committed by Dr Anwar as stated by police is that he had given instigating speeches at a sit in near Farooqia Masjid in the locality, that he had helped organize. The police allege that “false news was spread there that Muslims would not be given Indian citizenship due to NRC, and they would be sent to detention camps.”

Dr Anwar had denied making any such speech.

Expressing solidarity with Dr Anwar, Dr Bhatti said it is a fact that this opinion was shared by many more people, not just among Muslims, but also the other progressive and democratic sections of the society, including leading intellectuals, members of the judiciary, retired bureaucrats, human rights activists and even organizations like the United Nations.

Echoing similar views, Dr Vikas Bajpai, member national executive of PMSF, said a dissenting opinion is a right guaranteed by the Constitution and can in no way be construed as a crime.

Apart from a violation of democratic rights of the people, Dr Bajpai further said that the filing of a false FIR against Dr Anwar is also a frontal attack on a doctor committed in service of the people, and at a time when the need for such services could hardly be overstated.

It seems that attacking doctors committed to the cause of the people has become the want of this government, as has also noted during the ongoing COVID pandemic, he added.

It is said that Dr Anwar had written a letter on May 15, over 2 months after the riots, to senior officials of the Special Cell and Crime Branch (Delhi Police) and marked a copy to Prime Minister Narendra Modi and Home Minister Amit Shah, among others.  4-page letter written in Hindi has levelled serious allegations against the officials of Special Cell and Crime Branch of Delhi Police in which he alleged that Delhi Police was upset with him because he spoke to Justice S Muralidhar, the then Judge in the Delhi High Court who was transferred immediately after he had severely reprimanded the police for its role in the violence.

Dr Bhatti and Dr Bajpai said the PMSF demands that the government should desist from hiding its failings behind a false narrative where the victims themselves are being framed as oppressors.

“The false case slapped against Dr M A Anwar is withdrawn forthwith and there be a free and fair investigation of all cases related to the February 2020 northeast Delhi riots by a judicial commission headed by a retired judge.”