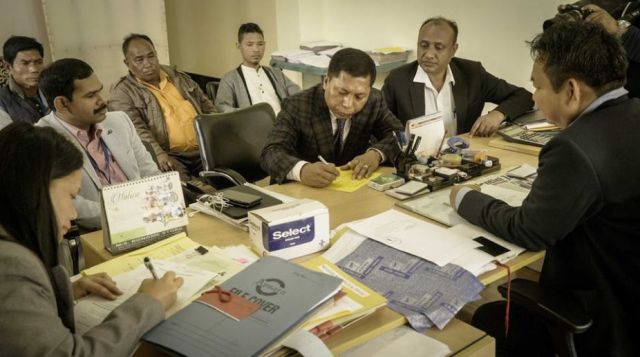 “It is highly condemnable to reject the visa application of a global religious leader to attend the sesquicentenary celebrations of Christianity organized by the Garo Baptist Convention.

“In the past, many religious leaders be it Pope (John Paul II) or Dalai Lama or Sri Sri Ravi Shankar have visited Meghalaya without any objection. We have never opposed to any of their visit since we have no hidden agenda,” Sangma said, adding the step only demonstrates the hidden agenda of the BJP government against the Christians and other religious communities.

The BJP which is trying to unseat the ruling Congress in Christian-dominated state, said that the issue is being “communalized”.

“Why are you giving this a communal and religious angle. Countries like England and Canada rejects visas to so many people irrespective of their religion. So does it mean these countries are anti-Christians. Ministry of External Affairs has to follow a standard protocol,” said Union Tourism Minister K.J.Alphons.

Condemning the development, Hill State People’s Democratic Party President, Ardent Miller Basaiawmoit said: “BJP is not a secular party…. This is not the first time that the BJP government is not allowing the foreign Christian missionaries to visit India. We do not know why the BJP is so against the Christians communities in India.”

The Baptist World Alliance is a worldwide alliance of Baptist churches and organizations, formed in 1905 in London.