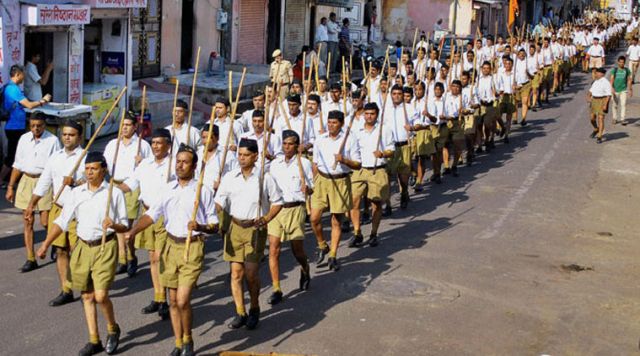 Kolkata : Claiming that the Rashtriya Swayamsevak Sangh (RSS) would keep on working in taking the Hindutva movement forward in West Bengal, the organisation’s state leadership on Wednesday said its membership has significantly increased here in recent years.

“In the last three to four years, the membership drive of RSS in West Bengal has yielded good results. The number of young men and women who have joined the ‘Shakhas (daily gathering units), are really high. In 2013, the number of Shakhas in West Bengal was 750, it has increased to 1,279 so far in 2018,” RSS South Bengal General Secretary Jishnu Basu told reporters here.

“In Bengal and few other states where the condition of the Hindus is not good, RSS would to try to increase its strength by increasing the number of shakhas and through its social welfare (seva) activities, so that the Hindutva movement in West Bengal can go forward and we can fight the anti-national forces like those in Dhulagarh, Kaliachawk and Khagragarh,” he said.

Referring to the prohibitory order issued by the Kolkata Police on carrying “sharp and offensive weapons” in public places, Basu said it would abide by the state law and order during the Ram Navmi celebrations this year, as long as it applies to Muharram rallies as well.

“I think the success of Ram Navmi is not dependent on brandishing weapons. The decision on how to celebrate Ram Navmi this year would be taken when the time comes. We will abide by the law and order in the state. If the state says there should be no weapons in Ram Navmi and Muharram rallies, we should follow that,” he said.

He also accused the state government of wrongly jailing their activists during Ram Navmi last year and said that the state ruling Trinamool Congress’ decision to celebrate Ram Navmi themselves this year, shows they are willing to come back to the mainstream.

“RSS does not aim to be a supporter or rival of any particular political party. So if the state ruling party Trinamool Congress or the left parties in Kerala celebrate Ram Navmi, it is good. This is what the Hindu society wants,” the RSS leader said.

“The Bengal government imprisoned 105 innocent youths for celebrating Ram Navmi last year. This year they themselves are willing to celebrate Ram Navmi. It shows that their mindset has changed and they are willing to come back to the mainstream. We welcome this change,” he added.