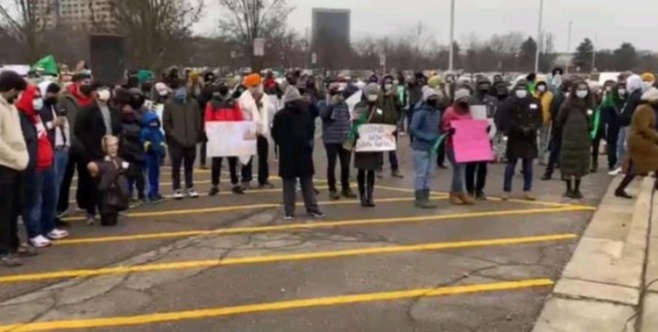 On a cold Michigan afternoon with freezing temperatures of 30 deg F, over 500 members of Indian American diaspora held peaceful protest and a Car Rally in the Troy city, Michigan on Sunday December 20, 2020 between 1 – 4 PM local time in solidarity with the farmers in India.

The rally was arranged by representatives of diverse ethnic groups of Indian Americans, with many ethnicities and religious backgrounds, including Buddhists, Christians, Hindus, Muslims, and Sikhs. The protestors who spoke at the rally expressed their transparent and unbiased views and awareness about 3 farming bills and how these bills passed as laws by the India Parliament impact the livelihood of farmers, including their human rights and personal freedom. The protestors were professionals from various backgrounds like attorneys, businessmen/woman, IT professionals, automotive engineers, university students and faculty, physicians, corporate executives and next generation of the Indian Americans.
Many speakers addressed the protest rally. Some of the speakers who have their friends and family members participating in the farmers protests in India talked about the adverse impacts of the three new Agricultural Bills adapted by the Indian Parliament under the BJP Prime Minister Modi’s unconstitutional political maneuvering. The agricultural bills are in the individual state jurisdiction and not the parliament. The protestors used different languages, display of banners, and chanting of slogans to show their solidarity with the farmers in India.

Masood Rab, President of CAPI (Coalition of Americans for Pluralism in India) reminded the gathering that Indian Americans of all ethnicities and religions stand committed to help the farmers in India until the draconian bills against them are retracted by the Modi Government.

Mahesh Wasnik, a member from NRI Ambedkarite group mentioned about the conditions of farmers in Maharashtra, with over 15,000 of them having committed suicides since last year.
Prabhakaran and Thiru a member from Periyar NRI group mentioned about the conditions of farmers in in south India.
Other community leader’s speakers reminded the gathering that the fundamental pillar to any democracy is the right to assemble peacefully to express their views and appeal for justice. This right of expression and basic human rights are denied by the current Modi Government to the farmers and the citizens who do not agree with government policies.

Amrinder Singh and Harry from GENCO Alumni Association of Michigan gave vote of thanks to the protester families for their participation in the successful and peaceful rally and braving the cold temperatures.

The event concluded with a Car Rally with US, Indian, and Indian Farmer flags displayed. Troy Police stated that their count of the cars was more than 300.

CAA protesters observe one day fast in solidarity with farmers

Is the farmers scared or the prime minister?

How Shaheen Baghagh protests have indirectly inspired the farmers’ protest