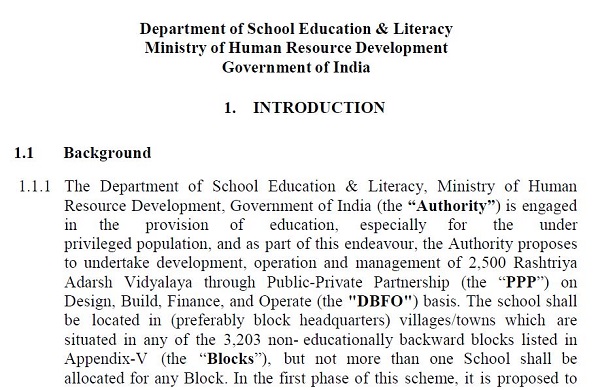 New Delhi, April 20: The Congress-led UPA Government at the Centre has come up with ambitious mega project to open 2500 model schools “especially for the under-privileged population” across the country. But interestingly, the Union Ministry for Human Resource Development – which is running the project – has comfortably ignored the most illiterate states of the country like Bihar and Jharkhand and more importantly minority-dominated blocks.

“The  Department  of  School  Education  &  Literacy,  Ministry  of  HRD,  is engaged in the   provision  of   education,  especially  for   the   under-privileged population, and as part of this endeavour, the Authority proposes to undertake development, operation and management of 2,500 Rashtriya Adarsh Vidyalaya through Public-Private Partnership (the “PPP”) on Design, Build, Finance, and Operate (the “DBFO” ) basis,” reads the document of the ministry. Muslim Mirror has got a copy of the 129-page document.

The interesting part is that though the scheme is meant for under-privileged population, HRD has decided to run the project in non-educationally backward blocks, and thus many blocks have been chosen in Kerala though it is the most literate state of the country.

“The school shall be located in (preferably block headquarters) villages/towns which are situated in any of the 3,203 non- educationally backward blocks,” reads the document of the ministry.

Senior AMU alumni P  Mohammad and Mohammad Aslam pointed out that the selection of 2500 blocks has been made without any basis.

“The school shall be located in villages/towns which are situated in any of the 3,203 non- educationally backward blocks selected by HRD Ministry without any basis throughout India.  As a part of this Project, it has decided to carry out the process for selection of private entities to whom concessions for a school in each of the selected Blocks (“School”) may be awarded,” say the AMU alumni who reside in Delhi and actively engaged in lobbying for minority welfare issues.

“Quality Schools are very scarce and having huge demand in Bihar and even in places like Delhi schools have more than 30% students enrolled from Bihar and because of unavailability of Quality Schools in their home state, the parents are forced to send their children in their tender age for Quality Schools in Delhi and rest of India. People are like small landowners are ready to sell out their basis of livelihood for the Quality Education outside Bihar for their sons and daughters, since in Bihar people have no future hope other than Education,” said Mr. Parwez and Mr. Asalm.

“The HRD Ministry and their officials have recklessly ignored the state of Bihar, Jharkhand and Minority concentrated blocks. It seems there is institutional bias within the decision making body of HRD Ministry and a portion of the decision makers are trying hard to create Bihar as a labour colony for a cheap supply of labours in other parts of India,” they said.

The most interesting part of this document is the APPENDIX- V List of 3203 Blocks (Page 68/69 for Bihar) identified for Rashtriya Adarsh Vidyalayas, where the selection of only 4 blocks within the state of Bihar that is without any basis and the minority population within these 4 blocks are less than 10 percent. Bihar has 75 Blocks and Jharkhand 44 blocks identified by Ministry of Minority Affairs with more than 25% of minority population but none of these blocks have been taken into consideration by the HRD ministry.

“We Senior Alumni of the Aligarh Muslim University based in Delhi strongly demand the government to investigate this institutional bias with HRD Ministry and there must be an action against those officials who are recklessly trying to ignore the most poor and backward population of India and not providing an opportunity for the young population of this region to complete with the rest of India,” demanded the AMU alumni.