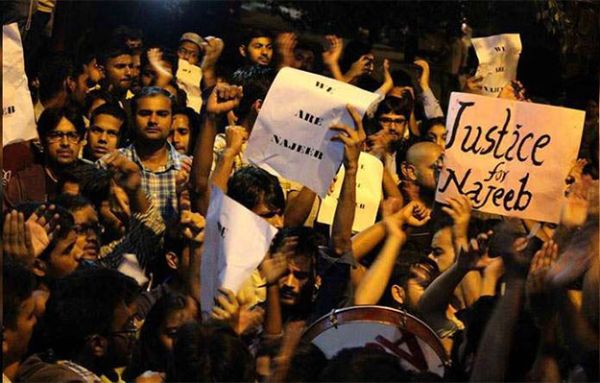 New Delhi, Oct 22 : As a mob of around 30 students rained blows, abuses and communal slurs on JNU student Najeeb Ahmed on the night of October 14, some of them could be heard saying tauntingly, “Issko 72 houron ke paas bhejna hai (We will send him to 72 virgins)”.

As another day goes by without any trace of the missing JNU student, another eyewitness account comes to the fore of how the events unfolded on that night.

Shahid Raza Khan, an M.Phil student of the School of International Studies (SIS) at the Jawaharlal Nehru University, recounted to IANS the details of that night.

Khan says that night he “heard some noise” and ran down to the first floor. He says Vikrant Kumar, the Akhil Bharatiya Vidyarthi Parishad (ABVP) member, saw him coming and approached him for help. “He asked me to save him from Najeeb, who he said was beating him for no reason,” Khan told IANS.

“But when I saw Najeeb it was he who was bleeding from the mouth and nose. We called the warden and took Najeeb to the bathroom for a wash. But in no time about 25-30 other students came and thrashed Najeeb inside the bathroom,” he added.

Vikrant is reported to have gone to Najeeb’s room to campaign for the post of Mess-Secretary and got into an altercation with him. ABVP members have claimed that Najeeb started the fight upon seeing Vikrant wear the ‘kaleva’ (sacred red thread) on his wrist.

Khan also revealed that Najeeb was being continuously beaten by the mob on the way down to the Warden’s office.

“He was beaten even on the stairs and even as the warden unlocked his office. It looked completely like a lynching. Upstairs someone turned off the corridor lights, and Najeeb was beaten in the dark, before someone switched on the lights again,” he said.

Besides the physical blows being rained on him, abuses and communal slurs were also hurled at Najeeb, Khan said.

“The Warden should have been more strict and unbiased. When inside his office all the blame was put on Najeeb’s head. He was constantly abused even inside his office. They kept on saying ‘Issko 72 houron ke paas bhejna hai’ (We will send him to 72 virgins). You know what it means,” he added.

His roommate Mohd Qasim gave an undertaking to the hostel Warden of Najeeb’s character. IANS accessed the letter, and the contents are a far cry from the rumours of Najeeb being of unsound mind, spread by some students.

The handwritten letter by Qasim, reads: “Sir, I have observed no temperamental problem or unusual behaviour in him (Najeeb). All claims of his being mentally unsound are false.”

He adds that Najeeb is a loner and keeps to himself. However, strangely Quasim adds in the letter: “I request you to take strict disciplinary action against him and demand that he be kept out of bounds of the hostel.”

The authenticity of the letter can’t be verified. Rumours are afloat that the letter was not penned by Qasim, but by another student — an ABVP member.

“Can you perceive any mentally unstable student getting through in one of the toughest courses in JNU? He was very intelligent and studious type,” Najeeb’s cousin sister Sadaf Musharraf told IANS.

Musharraf complained about the “sheer indifference” of the university officials initially to Najeeb’s disappearance, when they refused to meet her. The Proctor told her that it was the Warden’s responsibility and that they could not do anything in the matter.

Although, an FIR has been filed and a Special Investigation Team (SIT) formed to trace Najeeb, the communal rift in the premier university is constantly widening and has become more obvious than ever before.

“Although Najeeb had got admission in Jamia Millia, he wanted to study in JNU. He was granted a hostel just 15 days back. Why would he pick a fight with anyone in mere two weeks?”, asked Mujeeb, Najeeb’s brother who lives in Zakir Nagar.

(Vishal Narayan can be reached at vishal.n@ians.in)—IANS