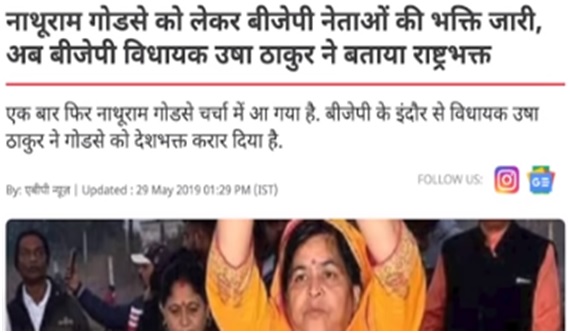 UP has watched ‘very closely’ the three-day visit of PM Narendra Modi to US, which of course is also very likely to have a fallout on the polls prospects, as UP is slated for polls in the next-six months. It was not very late, when Modi had exhorted for ‘Abki Baar Trump Sarkar’ and ‘Howdy Modi’, but January 20, proved to be the end of Trump government and Joseph Biden took to power as US President. The political analysts were then cautioning Modi, not to cross-the-extent but Modi did not listen, and today is the fait accompli, as the subdued response the tour has been the outcome. The details of Biden-Modi meeting lacked all enthusiasm and it turned-out to be a typical routine meeting, for all the forlorn love which Modi had once exuded for Trump. Never, perhaps, India was to be kept-at-bay in foreign office like this.

The first picture which Modi gleefully tweeted was with the Indian origin US VP Kamala Harris, but the underwhelming response she gave was totally unexpected. She did not post the meeting on her twitter for 13 hours! Something which smirked BJP MP Subramanian Swamy too. Harris also did choose to admonish Modi on the human rights situation in India, as newspapers in US were agog with references (about Modi), ‘who has presided over an increase in religious polarization in his country, with more laws targeting religious minorities, including its large Muslim population,’ referred Los Angeles Times on September 23 1. She had contended that as democracies around the world were under threat, “it is imperative that we defend democratic principles and institutions within our respective countries”.

The next stop was to be with Joseph Biden in which Modi was chastised about Mahatma Gandhi’s message of tolerance, respect and diversity which is needed more than ever. The references about Mahatma is what needs to be put into nation’s perspective, today all the more, as Modi party’s (BJP) open disdain for Mahatma Gandhi is all too well known, particularly so, when October 2, the birth anniversary of MK Gandhi is being observed nationwide. There are examples abound, about BJP affiliated leaders, MLAs and MPs to have time and again debunked Mahatma and have instead lavished praises on his killer Nathu Ram Godse. BJP leaders, down the line, have been involved into eulogizing Godse as their ideal, have made temples in the name, erected his statues and have praised him to the limits of worship! So as to make Godse a brand patriot. And, do not consider Mahatma Gandhi a patriot in their parlance.

Modi woke-up well, while talking to Biden, to the reality and started a sweet tête-à-tête about the ‘trusteeship of planet’ propounded by Mahatma, for he knows that the icon of Mahatma is what is the international mantra, which has romanticized the world for the last so-many-decades. Modi would make sure that his love for Mahatma was to spill, which no doubt, was the hypocrisy of the highest order, as his party cohorts have been openly debunking Mahatma, as Modi would just put the mask-on.

Why did not Modi remember his own party MP Sadhvi Pragya who had called Godse a patriot forever? Which had then turned Modi sad, but was there any action also taken against Pragya? If not there was a tacit understanding. Assam BJP MLA had come in open support of Pragya and that it was the bullet

of Godse which had to stop Gandhi. BJP another MP Sakhshi Maharaj too has doled out the same ‘Godse patriot’ 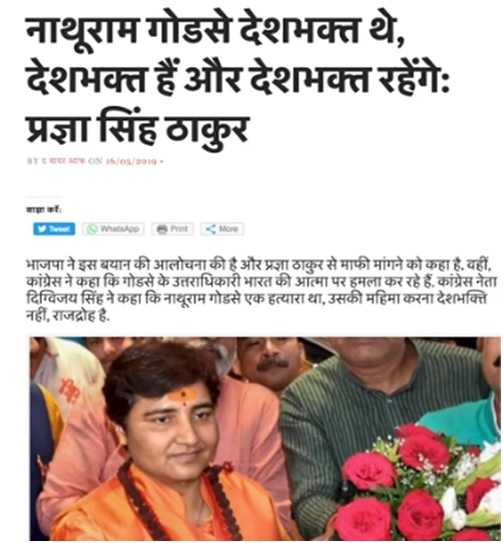 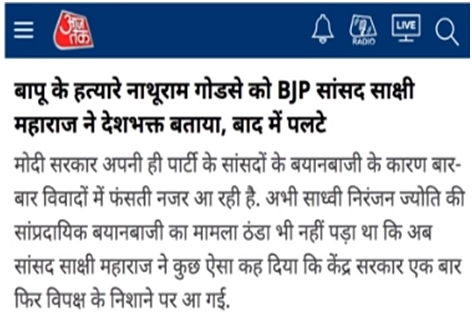 BJP MLA from Indore Usha Thakur also expressed her inherent love for Godse as a patriot. Hence, it starkly becomes clear that BJP has no love lost for Mahatma and the pent-up desires to eulogise Godse over Gandhi. Finally due to BJP at Center as well as in many states, it has opened the lid for Godse’s-love at the cost of Mahatma! There was never ever a ‘show cause’ given to anyone for discordant notes on the father of nation.

What would need to be mentioned here is that Hindu Mahasabha in actuality is the father of all Hindu organizations. It preceded RSS, and later took to Bhartiya Jana Sangh avatar which later rechristened itself as BJP, and Mahasabha has long campaigned for a temple of the assassin in Gandhi, and Mahasabha and BJP, are but the faces of the same coin. Such voices have been coming-up from UP and MP etc for long. Mahasabha is the baseline on which BJP has structured its building, hence, to expect any displeasure from BJP on the same would amount to be a joke in the first place. Modi is competent to the extent to showcase Gandhi as an icon of Indianess to garner support abroad but inside the country could not dare censure the anti-Gandhi elements in his own party. Nothing so shamelessly hypocritical has happened in the history of independent India.

The tour was yet to come to a bitter end as Modi addressed literally the empty seats at UN, on September 25, which shows his dwindling popularity, and thereafter, a simultaneous effort was made to show, by BJP centric social-media that Modi’s picture was the banner news on NYT, which turned-out to the fake, as NYT clarified it did not publish any such picture!

Last but not the least came the picture of his return to New Delhi, in which there wasn’t anyone even from BJP to receive him back, in a picture shared by NDTV, after what may all be termed as a damp squib visit.

The way Modi ill-advised Biden on media handling has just added another grubby moment for Biden, and the White House Press Secretary, had to clarify on it. But the worst part for BJP is that even when BJP tries hard to forget Mahatma, the world makes it remember, and makes BJP to abide by it or else India would stand with a loss in face on all international standards. The tragedy however, is that all foreign dignitaries, while visiting India, pay homage to Rajghat- where Gandhi’s Samadhi is, but no one has a clue about Birla House, where he was shot-dead. It is time this place also makes to all visitors itinerary. Or else Godse will also reach parliament the way VD Savarkar has. But, this abandoning of Mahatma by BJP will have forbearance on BJP poll fortunes, as UP may oust a party which has betrayed the cause of one of the founding fathers of the nation, in 2022 assembly as well as in 2024 general elections.The writer is a former UP State Information Commissioner, a lawyer and a political analyst.