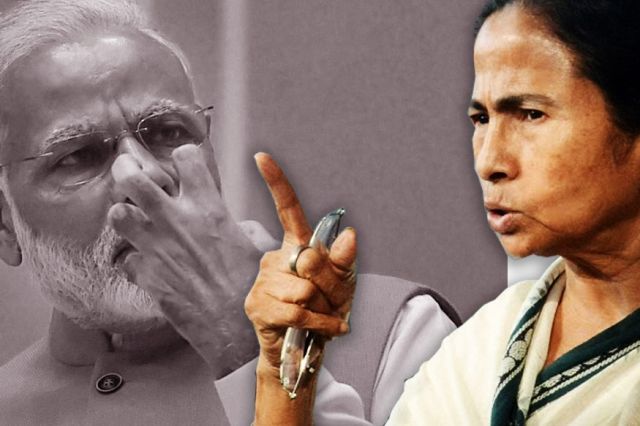 New Delhi: Trinamool Congress supremo Mamata Banerjee attacked Prime Minister Narendra Modi for doing ”Hindu-Muslim” a day after the Election Commission of India accused her of seeking votes on ”communal grounds” and issued a notice to her over the same.

Banerjee on Thursday said she has done nothing wrong as she only wants that vote shouldn’t get divided. While addressing a rally in Damjur, Banerjee questioned how many notices were sent to Prime Minsiter Narendra Modi who ‘does Hindu-Muslim’ every day.

How many complaints have been registered against those people who called Nandigram’s Muslims Pakistanis? Aren’t they ashamed? They can’t do anything against me. I am with Hindus, Muslims, Sikhs, Christians as well as tribals, the West CM was quoted by news agency ANI as saying.

The TMC chief further said that even after 100 complaints against her, she will not change her stand as she only appealed to people that votes shouldn’t get divided.

The commission’s action came after BJP leader Mukhtar Abbas Naqvi complained to the election body alleging that Banerjee — the Trinamool candidate from Nandigram — had on April 3 appealed to the Muslim voters not to let their votes get split among different political parties, while delivering a speech in Tarkeshwar in Hooghly district that was telecast live on ABP Ananda. The BJP alleged that she openly demanded votes on communal grounds for her party.

Speaking about the different welfare schemes that her government had initiated, Banerjee said that for the minority community, there was the Aikyashree scheme. She added, ”I am requesting my minority brothers and sisters with folded hands don’t divide the minority votes after listening to the devil (shaitaan) person who had taken money from the BJP.”

The commission said that the statement made by Banerjee on April 3 has been examined and the same has been found to be in violation of the provisions contained in Section 123 (3), 3 (A) of the Representation of the People Act, 1951 and also Clauses (2), (3) and (4) of Part I of General Conduct of Model Code of Conduct for the guidance of political parties and candidates.