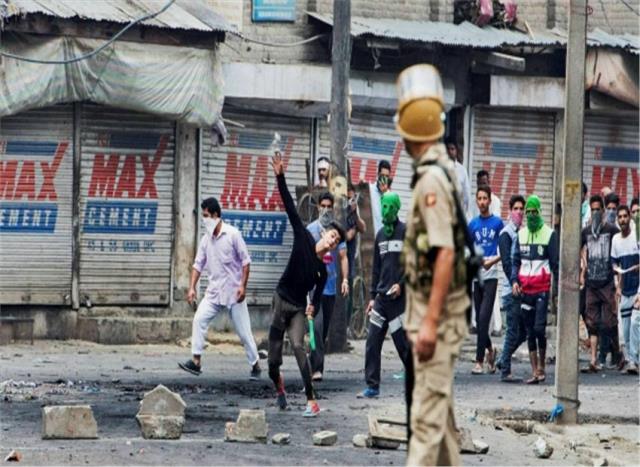 New Delhi:  Releasing the four booklets on the performance of the 4-year-old the Modi Government, CPI (M) said it has “pushed Kashmir to the brink.”  Urging for the resumption of dialogue with Pakistan and an end to ‘repressive measures’ in Kashmir,  the largest constituent of the Left Front said: “the BJP-RSS have used the issue of Kashmir, branding all Kashmiris (Muslims) as terrorists to further their communal agenda in the rest of the country.” It also recommended that the ‘original intended provisions’ of Article 370 must be restored.

CPI (M)  general secretary Sitaram Yechury along with Polit Bureau member Brinda Karat released four different booklets on `Four years Modi Government misrule: Why it has to end’, here at the party headquarters. Calling the government as “Modi led BJP/RSS government”, Yechury said this is ‘Jhoot ki Sarkar, loot ki sarkar’) and enlisted its ‘failures’ on several counts and ‘broken promises’ with the people. It has been a “government of loot and jhoot (lies)”, he added.

The booklets enlist the performance of the government on various fronts such as the economy, jobs, health, agriculture, food security, Kashmir, foreign policy and attacks on Constitution, the promises made by Modi in 2014 and promotion of “pseudo-science”, among others.

On Kashmir, CPI (M) leader said “the situation in Kashmir represents one of the biggest failures of Modi led BJP/RSS government.” and urged the government to end ‘repressive’ actions in Kashmir.  The use of the army and security forces as the single focus to “deal” with the Kashmir issue has led to a most disastrous situation, he added.

In the second booklet titled ‘Constitution: Denied, Diluted, Dismantled’, the party dwelt upon the situation in Kashmir under the sub-heading ‘Pushing Kashmir To The Brink’ in greater detail spreading over five pages.

CPI (M) blamed that the government has adopted only militarist approach in dealing with the Kashmir’s political problem that has led to a most disastrous situation in Kashmir.

“The critical issue is that the Modi Government has approached the issues of Kashmir from the single point of security instead of approaching it is as a political issue which requires dialogue with all sections of the people. The use of the army and security forces as the single focus to “deal” with the Kashmir issue has led to a most disastrous situation.”

In fact, the four years of Modi Government’s policies have helped Pakistan’s designs in Kashmir to keep unrest and violence alive, it added.

“Firstly, contrary to the claims made by the Prime Minister himself, terrorist attacks and deaths of security personnel have not decreased but have increased hugely.

While comparing deaths in Jammu and Kashmir during UPA government’s last 4 yrs and Modi government’s 4 yrs, it said civilian death increased by 51 percent and security personnel death by 81 percent.  From June2014-May 2018, as many as 1069 people including militants and civilians were killed with an increase of 44 percent. The figure was 744 during the same period in UPA government.

Thus the Modi Government policy has failed to end “terrorist” attacks and in fact has led to an increase in the spiral of violence, it said.

It also pointed out that single-focused policy has led to a deep alienation of the people of Kashmir, more than ever before.

“Considering that the people of Jammu and Kashmir and particularly in the valley, had disregarded the boycott calls and threats of the extremists not to participate in elections, and had voted both in the Lok Sabha and the State Assembly elections, the Modi Government had the opportunity to win their confidence through concrete measures. Instead, it destroyed that opportunity.”

“In July 2016, after the killing of Burhan Wani, a Hizbul militant, by the security forces there was an upsurge of protests. This was brutally suppressed by the security forces under orders from Delhi implemented faithfully by the PDP led Government. 6000 protesters were injured in action by security forces, 500 suffered eye injuries leading to scores being blinded, by the use of pellet guns. Hundreds of young people were locked up for over two years branded as terrorists. It is only recently that those charged with “stone pelting” were released.”

CPI (M) also criticized the PDP-BJP Government in the State saying it has only sharpened the communal divide between Jammu and Kashmir.

Referring to the Kathua rape case, it accused the Sangh Parivar of constantly making attempts to communalize and divide the people of the two regions of Jammu and Kashmir.

“The communalisation of politics by the Sangh Parivar was vividly exposed in the horrific rape case of a minor in Kathua, Jammu. Here, according to the charge sheet, the child victim was selected by the rapist because of her being a Muslim and the rapists were defended by the top leaders of the State BJP because of their religious identity as Hindus. Nothing can be more hateful than the use of rape as an instrument for a communal agenda.”

The largest left party also accused BJP-RSS of using Kashmir issue, branding all Kashmiris (Muslims) as “terrorists” to further its political agenda despite sharing power with the PDP in the state.

“The BJP-RSS have used the issue of Kashmir, branding all Kashmiris (Muslims) as terrorists to further their communal agenda in the rest of the country. As a corollary, anyone who opposes the Central and State Government’s use of repression in Kashmir is branded anti-national. Thus Kashmir becomes a tool to further a jingoistic fake nationalism which in fact neither serves India’s interests nor that of the people of Jammu and Kashmir.”

Because of this reason, the CPI (M) said the Modi government has refused to open a dialogue with the representatives of all sections of the people which also go against the assurance given by the Home Minister Rajnath Singh who led a parliamentary all-party delegation to Kashmir.

The party also criticized the appointment of a retired intelligence officer as ‘interlocutor’.

“Two years after that the Centre has belatedly appointed a so-called Special Representative an ex-intelligence agency officer as an interlocutor. However, without a specific mandate, it has proved to be an ineffective measure.”

“The State is suffering from acute unemployment and chronic underemployment. According to the latest report of Centre for Monitoring Indian Economy, unemployment has touched 38.8 percent (2016-17). 80 lakh educated youth are unemployed according to calculations from various education reports.”

It said nothing has been done to improve the tourism sector which has badly affected due to the continuing violence.

“The tourism destinations, 55, identified by government and some 10-12 so-called dream destinations do not show any progress as no public investment and required infrastructural development has taken place.

It reminded that Prime Minister Talks of the pen replacing the gun in the hands of students, the reality is that the educational system has been badly affected with random closures of schools and colleges because of violence.

“Anganwadi workers are getting what is probably the lowest allowances in India with workers getting just Rs.3600 and helpers just Rs.1800 per month.”

On power sector, it said the Modi Government had promised development for the State with infrastructural investment.

“But just take one example of electricity availability. The power requirement of the J&K is 3000 MW against the availability of 2200 MW leaving a power deficit of 800 MW (i.e. 26 %). The power deficit which is primarily because of system constraints at transmission & distribution levels is met by enforcing power cuts in both rural and urban areas. Frequent power cuts are normal.”

“The C.Rangarajan Committee report had suggested the return of two power projects, namely Salal and Uri HEP having a total capacity of around 900 MW to the State. But the government has refused to implement this and the report continues to gather dust. On the other hand, the resource-starved State has had to spend as much as Rs.16, 000 crores between 2014-2017 to purchase power for the State.”

Recommending for the resumption of dialogue with all stakeholders including Pakistan,  CPI(M)  claimed that it  has “consistently fought for the democratic rights of the people of Kashmir upholds the principle of Jammu and Kashmir as part of the Indian Union with a special status under the Constitution of India.”

There must be an end to repressive measures by the State. There has to be a political dialogue with all shades of the political spectrum. While strongly opposing all forms of cross-border terrorism, this must be accompanied by talks with Pakistan to resolve the Kashmir issue, it added.

When this correspondent asked what party meant by “repressive measures”?   CPI (M) general secretary Sitaram Yechury said the government has assured that the security forces do not use lethal weapons such as pelt guns but it did not stop.  Excessive use of force has been increasing alienation of people in the Kashmir valley, he said.