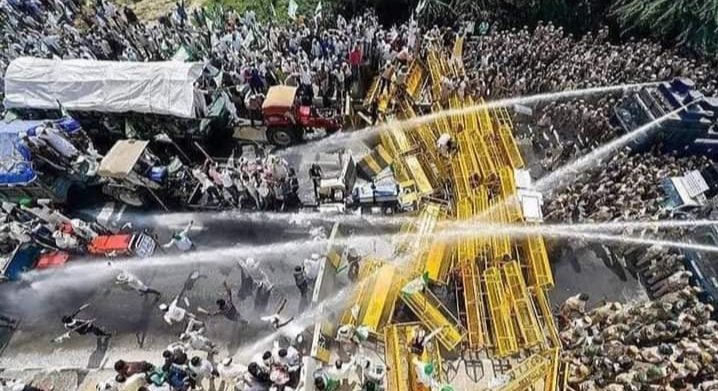 New Delhi: Opposition parties and several farmers and workers’ organizations on Thursday condemned the unprecedented use of ‘brute’ force to suppress the farmers’ protest march the “Dilli Chalo” campaign who braved tear gas, water cannons, and cold weather.  They said as the nation is commemorating Constitution Day, the BJP government is hell bent on suppressing the genuine demands and concerns of the farmers.

Thousands of farmer families from various states, including Punjab, Haryana, Karnataka, and Madhya Pradesh were walking to Delhi as part of the “Dilli Chalo” campaign, despite heavy rains and facing police suppression.

Coming down heavily on Prime Minister Narendra Modi,   Congress said today marks a black day in history due to several reasons. It is highly unfortunate and denigrating that the present government is dedicated to only protecting the rights of a few.

“ Today, around 62 crore farmers and 250 farm organizations from all over the country are protesting against the draconian farm bills but the present BJP government is hell bent on suppressing the genuine demands and concerns of the farmers”.

On the eve of Constitution day,   Prof Vallabh said farmers have been stopped from entering Delhi with force too in a number of instances. Does the constitution not guarantee rights for our farmers? Has the BJP government reserved the rights only for their privileged friends only? He asked.

All India Kisan Sabha said the Modi led BJP Government is making a big mistake of trying to suppress democratic protests through cowardly attacks. It said hundreds of agitating farmers were arrested in Haryana and demanded their unconditional release and for the restoration of right to protest.

It is also significant that the arrests in Delhi have happened when the protest had been permitted by the authorities.

“This attack on democratic rights ironically is taking place on the Constitution Day”.

AIKS General Secretary Hannan Mollah, CITU General Secretary Tapan Sen and other leaders were present at the protest at Jantar Mantar and they congratulated the millions of workers and peasants who came out to make the General Strike, Grameen Hartal and protests a historic success in more than 20 States.

Massive movement of farmers into Delhi is being reported. Farmers crossed Shambhu border at Ambala and have crossed Kurukshetra, Pipli Mandi in tens of thousands and are marching towards Delhi. More than 50,000 farmers will assemble at the Delhi border by today evening. Thousands of tractors and trolleys carrying farmers, women and children from Punjab and Haryana, many vehicles from Uttar Pradesh, Uttarakhand, Madhya Pradesh, Karnataka, Andhra Pradesh, Telangana, Maharashtra and other States are detained at different places.

Mollah said the BJP Government has resorted to inhuman use of water cannons in peak winter, barricades, boulders and vehicles to block roads to Delhi and also resorted to use of teargas and lathicharge.

Farmers have overcome the hurdles in Haryana and are peacefully marching to Delhi. Many places in Haryana farmers and workers are sitting on the roads wherever they have been stopped. The numbers are swelling with more people from villages joining.

AIKSCC leaders Medha Patkar, Pratibha Shinde, Madhya Pradesh AIKS Vice President Jaswinder, Karnataka AIKS leader Yashwant and others have been detained in Uttar Pradesh near Agra where they are picketing the roads as they are not being allowed to march to Delhi. Massive protests have been reported today from workers and farmers across the country with many States reporting complete Strike.

AIKS warns that workers and peasants will further strengthen the unity built and the struggle will go on until and unless the BJP Government withdraws its Anti-Farmer, Anti-Worker Acts and Anti-People measures being imposed making use of the COVID pandemic and lockdown.

The protest call was for 26th and 27th November, 2020. After today’s historic participation tomorrow the Central Government offices, Collectorates etc will be picketed. The Central Trade Unions have also decided to extend solidarity and actively participate. The united movement shall continue till demands are met.

While Congress   asked the government which constitution is it following?

“When the farmers reach out for their rights, they are suppressed, why is the government so scared of the farmers?”

Prof. Gourav Vallabh reminded that the BJP government had promised to double farmer income by 2022.

“But the fact remains that the situation of the farmers has worsened in the BJP tenure. Agricultural incomes fell to a 14 year low in 2018-19 and Agricultural products witnessed the worst price slump in 18 years the same year”.

He alleged that BJP is hatching a cruel conspiracy to mortgage agriculture and agricultural land in the hands of crony capitalists.

He said people of the country do not have trust on the PM who made a flurry of promises including depositing  Rs 15 lakh in each individual’s account, 20 million jobs every year and 100 smart cities etc but nothing was fulfilled.