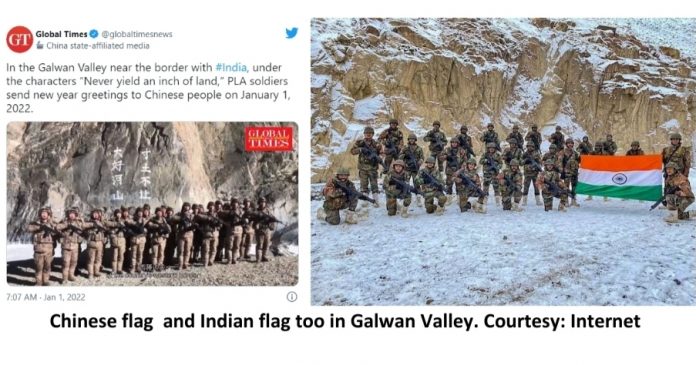 There is now going to be the 14th round of talks of Corps Commanders between China and India in the month of January, to somehow defuse the tension between the two Asian giants which has been underway since the last couple of months. Precisely after April 2020 when Chinese forces entered the Galwan valley in Eastern Ladakh, and which led to fisticuffs between Chinese and Indian forces on June 15, 2020, leaving 20 Indian and 4 Chinese soldiers dead. Since then there has been continuous incursions/provocations from the Chinese side inside the Indian territory including Arunachal Pradesh and Himanchal Pradesh too, but there hasn’t been any adequate response from BJP PM Narendra Modi, who has been besotted with only a blinkered vision over the entire Chinese issue, more precisely since the 74-days stand-off had happened between the two at Doklam in 2017. China has also captured 10 of Indian soldiers in the June 15, 2020 conflict.

Now it has come to light, according to Times of India on January 2, there was an exchange of sweets between the two forces at “major friction points in the strategically-located Depsang Plains as well as in Demchok, Kongka La and Chushul-Moldo in Eastern Ladakh. Similar interactions took place in other sectors of the 3,488 km LAC, including Nathu La and Kongra La in Sikkim and Bum La and Wacha Damai in Arunachal Pradesh. After the multiple PLA incursions into eastern Ladakh in 2020 which triggered the still-continuing military confrontation with India, troop disengagement took place in the Pangong Tso-Kailash Range region in February last year and subsequently at Patrolling Point-17A near the Gogra post in early-August.’ After the June 15, 2020 debacle a buffer zone was created between the two sides.

China is best into its policy of buying-time, in the backdrop of dialogues, which perhaps, have now lost their all relevance. What purpose does it serve when on January 1, Chinese soldiers unfurled their flag and sang their national song with ‘never to yield an inch of land’ written in the background in Galwan Valley. Only a day earlier on December 31, 2021, China had renamed 15 places inside Arunachal Pradesh which India had rejected. India is letting China do anything on its sweet will? India, as a tit-for-tat also unfurled its national flag in the same region, saying that Chinese had done so inside their own territory, which India has little to care about. But, the reality is different, as around 1000 sq. kms of Indian territory has already been captured by China after April 2020, had been reported in The Hindu 1 on September 1, 2020, and why else would China ever abdicate its claim, when Modi’s External Affairs Minister S Jai Shanker on September 10, 2021, had inked an agreement with Chinese counterpart in Moscow, in which India had forsaken its stand for the status-quo ante to pre-April 2020 position! 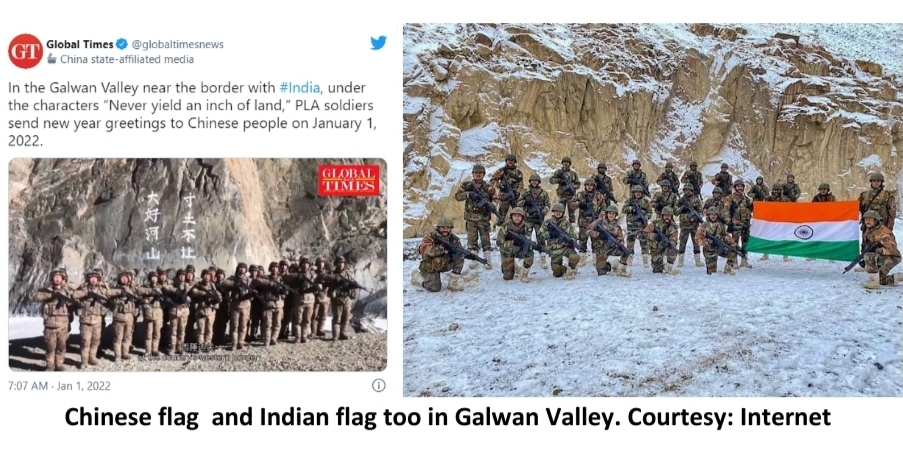 The whole emerging situation between the two counties has been very reasonably explained by one of India’s foremost defense analyst Pravin Sawhney, on June 4, on his twitter that Chinese took Galwan Valley to stamp their authority as ‘their land’, on which in post April 2020 they had first erected tents and later have built concrete bunkers and military infrastructure etc, so the big question is why is then India engaging into a dialogue? More, particularly when India’s Defense Minister Rajnath Singh on February 10, 2021, has confirmed to parliament (sic) that ‘not an inch of land will be given to China’, and that later India relented its position in Moscow. This is what is not being debated on any media outlets? He informs that the Moscow agreement was a ‘free-fall’ for India as there is not even the slightest reference that China would have to retreat to the prior April position. He also did elaborate that China and India agreed on disengagement which meant that China has refused for de-escalation and de-induction which is that China is to be now permanently in the Tibet autonomous region. Disengagement did happen in Pangong-Tso and Gogra, which of course media, showed as a Modi’s bravado. “India as its defence mechanism has sat on Pangong-Tso South as an answer to China position in Pangong North, but then India too disengage which was letting the tactical-gain go. China has not as yet China is reported not to have de-militarized the area, plus China also does not consider LAC as Indo-China border, is what the statement from Moscow tells,” he rued. India now seem to be totally on Chinese terms.

In the wake of the new turn of events, it has been reported in India Today 2 on January 3, that China has deployed its 60,000 soldiers in Eastern Ladakh, even in these extreme winters, thus making India to also close-in for an eyeball-to-eyeball confrontation. China is also learnt to have gone ahead with making a military bridge on Pangong lake near Eastern Ladakh, reported The Wire 3 on January 3, as per the new available satellite images, all the while playing a dialogue-dialogue musical chair game with India. This bridge is said to have been now into its last stage of completion, and thus, will enhance Chinese military edge by manifolds against India.

The next stage which is expected is that very soon China will deploy heavy machinery, missiles and its soldiers in the region, moreover, it has also got reported on WION on December 31, 2021 that China has deployed 120 Robots in the Tibet region. The robots are remote control and fitted with machine guns to be able to kill the enemy. This is surely to add more to the worries on the Indian side.

China has already made India to run-hard-for-money but the more of India’s nemesis is Pakistan, and ironically both the countries are in-togetherness against India, which became more aggravated as PM Modi abrogated Article 370 from JK&L on August 5, 2019. This made China and Pakistan knock at UNSC for thrice in the next one year. Any political or a defence analyst can now very easily prophesize that a two or rather two-and-a-half front war is what is hovering over India. China, Pakistan and the internal strife inside India’s Punjab and in the seven-sisters states of North East India, may also take place, according various media estimates.

What however has turn out to be a bombshell for India, is the latest video of Pravin Sawhney , of 20 Min 15 Sec, at ForceMagazine.net 4 on January 4, in which he has claimed that China and Pakistan will fine-tune combined operations against India in this coming year. In a very candid and calm manner he has put as to how China and Pakistan, since 2011 has had a degree of interoperability, as was highlighted once by the then Army Chief VK Singh, who had claimed about the presence of around 3000-4000 Chinese troops in the Pakistan side of Kashmir, 11,000 Chinese troops in Gilgit-Baltistan. “There were Shaheen Air Force exercises between China and Pakistan Air Force, followed by special-forces exercises. Now we have come to the stage of combined-operations and the theatre for these combined operations is very clearly marked. It will be in Kashmir, Ladakh, Siachen, Gilgit-Baltistan and the Kashmir part inside Pakistan,” he has opined.

So is India well-prepared for any eventuality of a war? A nation which had been ravaged by millions of dead bodies during the second wave of Covid-19! Why a party which claims to be a ‘hawk’ has shown such a trepid response on such issues? UP seeks an answer from BJP, as war will further give a blow to India’s economy and nothing else. How UP will answer BJP in 2022 is what time would tell.