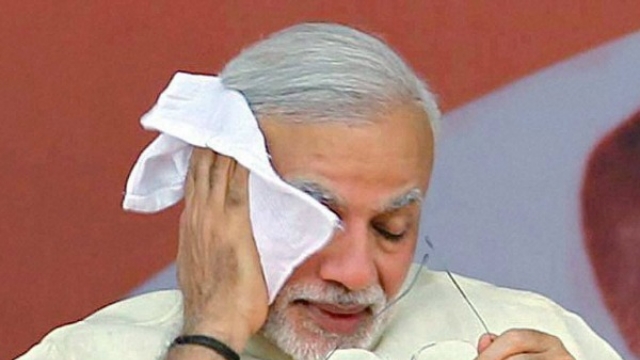 New Delhi: Continuing his sharp attacks on Prime Minister Narendra Modi, Aam Aadmi Party national convener and Delhi Chief Minister Arvind Kejriwal on Thursday said he has no knowledge about the economy and because of this the country was shoved into a painful situation. He also once again dubbed the demonetization move as a gigantic scam worth Rs 8 lakh crores.

“Modiji’s demonetisation decision (Note Ban) is, in fact, a Rs eight lakh crore scam. People believe that Modiji is not very educated and therefore did not understand the ramifications of the Note Ban on the economy, nor does he heed the advice of those who know better. The economy is in shambles and businesses and trade are at a standstill, but Modiji refuses to accept his mistake and take corrective action,” Kejriwal said.

He said it is the right of people to know why the PM had taken this drastic step.

“Modiji is taking such big steps, he has made the whole country queue up, has given a jolt to our economy, so people want to know does he even understand how the economy works. I demand the degrees should be put in public domain.”

He also urged the government that the money so far deposited in banks to the tune of Rs 12.4 lakh crore should not be used to write off the bad loans of Modiji’s friends and cronies.

Again raking up the Modi’s educational qualification issue, Kejriwal said despite the directive from the Central Information Commissioner, he was not shown degrees of Modi.

“In his speeches, Modiji had earlier said that he has only studied up to class 12th, but later these correspondence degrees surfaced and we tried to get to the bottom of the truth. The Central Information Commissioner ordered that all records and papers related to Mr. Narendra Modi’s  degrees should be shown to Arvind Kejriwal, but I was not been given the information.

“If the degrees are true, then why are these being hidden? So many RTIs filed were filed on my degrees and I always agreed to share all the details. Modiji sent eminent lawyer Tushar Mehta from Delhi to get a stay in the Gujarat High Court from making the degrees public,” the AAP convenor said.

The case pertaining to whether the degrees showing educational qualification of the Prime Minister are authentic was listed for hearing in the Gujarat High Court on Thursday.

In response to a question on the Delhi Lieutenant Governor and the IAS association’s conduct, Arvind Kejriwal said “It is sad that both the LG and the IAS Association are being used as pawns by the Narendra Modi government by threatening them with the CBI, ACB etc.