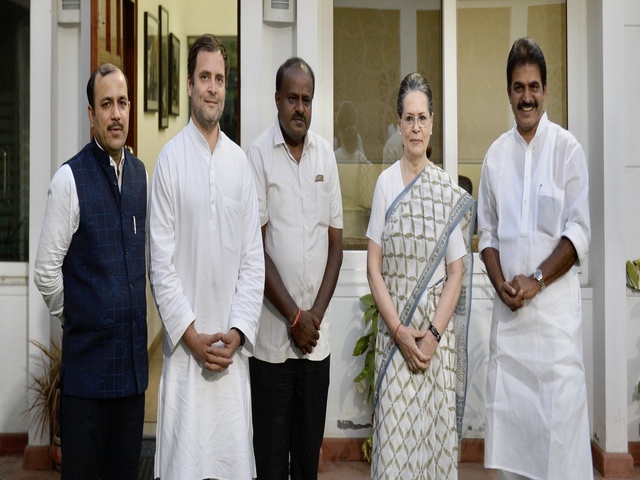 New Delhi: Hitting back at the BJP president Amit Shah’s calling JD(S) and Congress alliance “unholy”, Congress Monday said the Prime Minister Narendra Modi and Amit Shah should apologize to the people of Karnataka as well as the whole nation for the “dirty games they played to install the BJP government there. Demanding an independent inquiry into the “horse-trading and misuse of state machinery”, the party also indicated that those involved in this sordid affair would not get away with it. The party also called the PM as “the master of propaganda”.

Addressing the media shortly after BJP chief spoke to the media on Karnataka, Congress senior leader and former union minister Anand Sharma said what Amit Shah has said today is the “travesty of the truth, known facts.”

“The BJP stands exposed for its double-standards, double-speak, for its abuse of authority and the brazen use of unprecedented resources and money power at its command. The Karnataka verdict was not for BJP. BJP has invited and happily accepted self-ridicule.”

For bringing the army, Mohammad Ali Jinnah and Tipu Sultan during the electioneering, Sharma attacked the PM saying he “lowered” the dignity of the political discourse in the country.

The Congress would expect the Prime Minister to apologize to the country for presiding over a Government which trampled the Constitution and he also should be held accountable for violation of his own oath of office, he said.

Continuing his attacks on the PM, Congress leader said he has many firsts to his credit.

He said the Modi has been seen in abroad as “the master of propaganda” and a case study is being done in many universities.”

“And I was amused when an Ambassador of a very important country recently called on me and told me that your Prime Minister is the master of propaganda and he has become a case study in ex-number of Universities and he named the Universities, you can do the google search and went on to say that when we looked deeper, there is no substance and no truth.”

Alleging that the BJP spent about “Rs 6,500 crore rupees on the Karnataka assembly polls and each party candidate was given “Rs 20 crores”, Sharma asked whether the BJP will give now an account of its sources of money, from whom do they get it?

“All of you have seen, whether it is the media, the civil society and the international groups which watch the movement of money in every election.”

On the one hand, peoples’ money is not safe, peoples’ money was snatched away by Modi by his “authoritarian diktat of 8th November 2016 and BJP has all the money, he added.

Defending the alliance with the JD(S), he said by abusing the power and authority and agencies of the State and the money power yet they did not get the majority while the Congress got more the popular vote than the BJP.

He also alleged that the BJP tried to abduct MLAs, purchase MLAs.

“They have fine-tuned this art; they have become habitual offenders and repeat offenders of stealing Governments, stealing mandates.”

When this correspondent asked whether the new government In Karnataka would file FIR against those offering bribes to newly MLAs, Sharma said “there should be an independent open enquiry so that they are free to do, you cannot trust them with any enquiry and if a State Government, particularly after all their acts of commission and omission in Karnataka.

“How can the new Government investigate Shri Narendra Modi and Shri Amit Shah? But yes, they must not think that they will get away with it, they will get punished one day”.