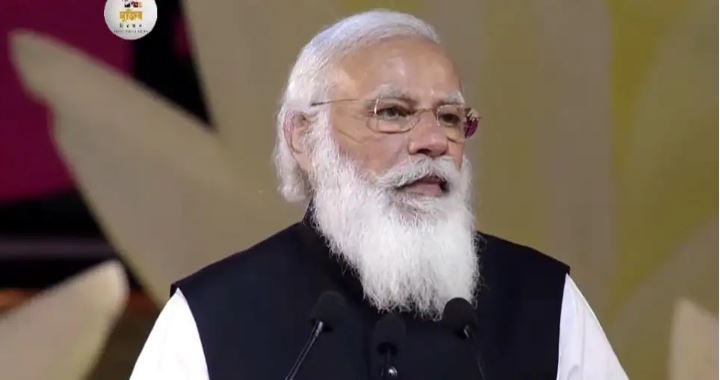 There are now wide spread reports coming from a different-different states as to how BJP MLAs are being rounded-up by people at large, accusing BJP representatives to have belied their hopes and with vows to never vote for BJP. There are a series of protests against BJP Cabinet Ministers, Defense Minister, Home Minister etc and three days back UP BJP Deputy Minister Keshav Prasad Maurya, was called a ‘pimp’ and hurled with worst abusive expletives and accused to have taken bribe etc. The anger against BJP is now palpable and splurged on the streets, if this video is true?

The skeptics are now dreading if BJP PM Narendra Modi might not face any protest, particularly after the announcement of the withdrawal of the three black agricultural laws, and yet when farmers have remained undeterred, as Modi stayed in UP state capital for three days ( November 19-21) and now to be followed by his proposed presence on the inauguration of Jewar airport in Western UP. The preparations are in full swing (sic), as it has been announced that ‘no one with black clothes’ would be allowed entry. Not only this, a black mask and a black skull cap are also to remain banned from the venue.

The step is the outcome of the over cautious security-team of Modi, as it is only Modi who has not as yet got the ‘protests-performed-live’, and in order to prevent any such mishap, the overdrive for anything black, not to be visible is to be made sure. In a country like India, where millions do not have a choice over clothes, will be too taxing for anyone to go near the venue, which perhaps, is happening for the first time in the history after independence, as even a mask of black colour, is now an anathema. It may also be referred that this ‘fear-of-black’, is not that new and has been going on, since the last few years, as back in the year 2019, as it was reported on January 4, that black clothes were a ‘no-no’ at Modi’s rally in Jharkhand. The same happened when Modi was in Benarus in October last.

The voice is dissent or anything in Opposition is therefore to be stifled. It was in July, when Modi was to visit Benarus and the local Samajwadi Party (SP) leader was put under house arrest. It brings to the cardinal question as to why that BJP is hell bent to kill every voice which opposes it? Is this to go well for any healthy democracy to survive? Things have reached to such a state, that posters at the very entrance of villages have been put, seeking a ‘no-entry’ to BJP leaders. Such voices have now gained-too-much in size particularly since September 2020 when anti-farmers laws were passed. It therefore, would not surprise anyone, that BJP had put under house arrest its own party leader Virendra Chaudhry on November 5, as UP BJP CM Ajay Singh Bisht was to arrive in Kairana and Chaudhry, was opposing Bisht visit. The Gurjar people are not happy with the Jewar airport project too. It was SP MLA Amitabh Vajpayee who shaved-off his hair, to protest Bisht visit to Kanpur, in the wake of COVID-19 mishandling, and was therefore, also put under house-arrest in May this year.

The stage over ‘anti-BJP sentiment’ is now the new normal. Voices from Uttarakhand (UK) which is also to go to polls early next year with UP, can be heard in a latest viral video, where a BJP leader is confronted by a voter who vouches never to vote for BJP. 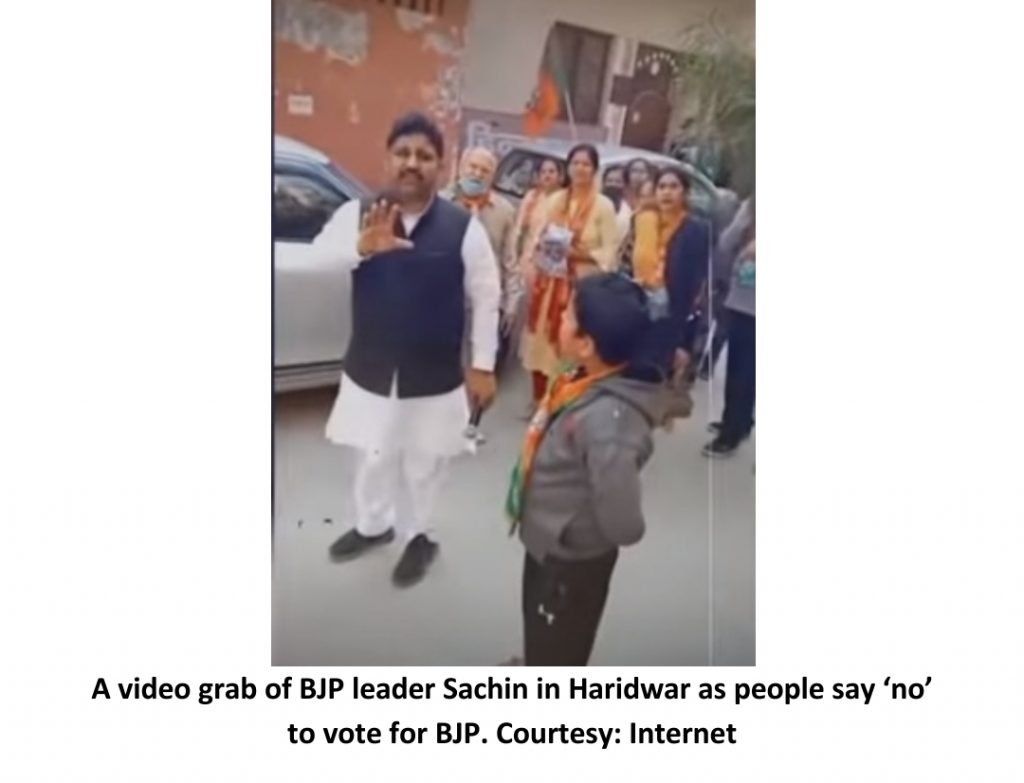 In another development, BJP MLA Sajnay Gupta, from Laksar (UK), must have been subjected to the worst humiliation as while he stood on stage, people took to the mike to announce they need not have such a representative and a BJP government, reported NBT on October 10.

It hadn’t been late when farmers had welcomed the BJP Development March with black-flags while it had passed-through the same Haridwar.

Meanwhile, in Lucknow, on November 22, a huge rally of farmers was organized at Eco Garden, on Kanpur Road, in which Rakesh Tikait addressed the crowd, which pledged that until Minimum Support Price (MSP) issue is not sorted out, the farmer’s agitation would go unabated. The farmers vent their anger that mere-lip-service of Modi on the withdrawal of ‘agricultural laws’ is just not enough unless there is a systematic cancellation through parliament, plus there is an adequate compensation to be announced for those farmers who died during this year long agitation. It may be known that an estimated around 650 farmers lost their lives, much to the ado of Modi’s government.

The farmers next demand apart from the legal backing for MSP is for the withdrawal of the draft of Electricity Amendments Bill 2020/2021, along with the sacking of Ajay Mishra, the State Home Minister in Modi’s government, whose son Ashish Mishra is alleged to have mauled farmers by running his SUVs on them. Farmers accuse Ajay Mishra to be the mastermind of the genocide and that he too should be booked under the conspiracy charge, as he had himself contended that farmers would be brought to their senses in two minutes, and which later, found his son on a killing spree on October 3, in Lakhimpur (UP). Ashish is right now in jail.

The repulsion for anything black in the BJP echelons are the signs of desperation, as BJP is now on the back-foot, to have been forced to roll-back the anti-farmer laws, but there are voices from inside BJP, from the likes of Rajasthan Governor Kalraj Mishra that a new law would be brought, once BJP tries to win, in the coming elections in five states, but farmers and people, across the spectrum, have sensed the BJP hoax, and the beginning of the final adieu of BJP in 2022 in UP and later in 2024 at the Centre is very much on the anvil.

It is here that SP, the most powerful incumbent force, is to capitalize and see an end to BJP. Let’s see what is to unfold soon.