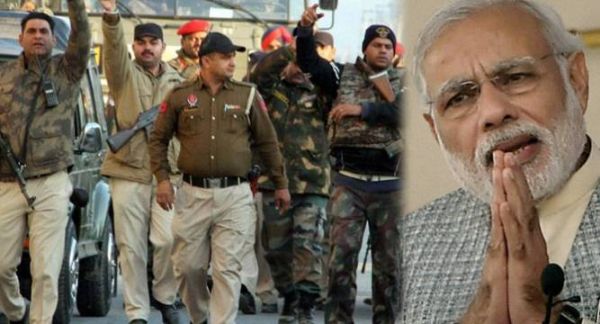 New Delhi, Jan 3 : Prime Minister Narendra Modi on Sunday chaired a high-level meeting with National Security Advisor Ajit Doval and Foreign Secretary S. Jaishankar in the wake of the terror attack at the Indian Air Force base near Pathankot in Punjab.

Modi held the meeting soon after his return after his two-day visit to Karnataka.

“Immediately on landing in Delhi, PM @narendramodi is chairing a high level meeting with the NSA, Foreign Secretary & other officials,” the Prime Minister’s Office said in a tweet.

Sources said the NSA briefed the prime minister about the operation carried out by security forces, including the National Security Guard, Indian Army and IAF commandos.

Security forces on Sunday nailed two more terrorists who had attacked the Indian Air Force base. Four terrorists were killed on Saturday in a 15-hour gunfight. The terrorists are believed to be from Pakistan-based terror outfit Jaish-e-Muhammad.

Seven security personnel, including an NSG officer, were also killed in the counter-offensive against the terrorists.

The terror attack came almost a week after Modi flew into Lahore, on his way back from Afghanistan, for a surprise meeting with his Pakistani counterpart Nawaz Sharif. Both leaders had vowed to pursue the derailed bilateral peace process.

Foreign secretaries of India and Pakistan are expected to meet on January 15 to draw up a roadmap for bilateral engagement.