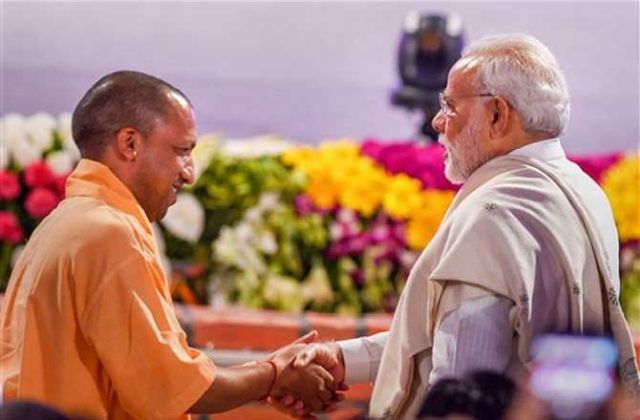 Lucknow : Prime Minister Narendra Modi, who on Sunday laid the foundation stones of 81 projects worth Rs 60,000 crore whose MoUs were signed in February this year at the UP Investors summit, lauded the state government and Chief Minister Yogi Adityanath for making this happen in a period of less than five months.

“I have been Chief Minister of Gujarat, an industry driven state and can well understand the number of difficulties and problems the team of Yogi ji must have faced and hence kudos that you all made this happen,” he said.

“It is a big, significant and an unconceivable thing where everyone from the Chief Minister to the last revenue official is involved,” he added.

“This is exceptional success… I am speaking on basis of experience,” Modi said while nothing that the ground-breaking ceremony which he was presiding over should ideally be called “record breaking” as the state had competed the journey from “intent to investment”.

“My heart says that UP would soon be a one trillion dollar economy,” he said, while stressing how the changes would open new vistas for the people of the state, including the unemployed youth.

“When I was elected an MP from UP I had promised the 22 crore people of the state that I will give back their love and trust with interest and this event is a part of it,” the Prime Minister added.

He also informed that gathering that due to proactive policies of his government, the energy deficit in the country, which stood at 4.2 per cent in 2013-14 had now narrowed down to less than one per cent. A sum of Rs 50,000 crore has been saved by the people by way of replacing conventional electric use by green energy like LED and solar energy, he said.

Union Home Minister Rajnath Singh, who was also present, said that he too had been the Chief Minister of Uttar Pradesh but had never expected such fast work as that the Yogi government had rolled out.